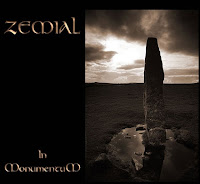 Despite the fact that it took a decade to manifest, I did not initially warm to the Zemial sophomore In Monumentum. Its epic, plodding pace seemed somehow vapid and discontented, and its style was a clear deviation from much of what the band had created in the past, honing in on a mesh of simplistic black and heavy metal that felt like a midway point between Bathory (Hammerheart, Twilight of the Gods) and something like Manowar. However, we all make a few mistakes in our time, and I couldn't be happier that this was one of mine. It's hardly a cult classic for all the ages, but through the years I've come to actually appreciate this record: consistent and dynamic as it gently thunders through its historical lyrical concepts.

For such a simple set of compositions, they put a lot into this. Archon Vorskaath's vocals are a crumbling, decrepit specter of loss and fell glories, and the guitars trod along with the same assured bombast you'd expect of mid-era Bathory, later Immortal/Demonaz, or perhaps even a little tint of Tiamat (Clouds) and Therion (Lepaca Kliffoth, Theli). A good dose of airy reverb to make the material seem even more grandiose, and liberal use of synthesizers and acoustic guitars that give it that almost 'Viking' flair. However, lyrically Zemial delves into its own country's past, with tributes to the 300/Battle of Thermophylae ("H TAN Η ΕΠΙ ΤΑΣ") and the battle of Gods and Titans so fundamental to Greek mythology ("March of the Giants").

The entirely of the experience is well structured, from the slower, steadied material ("For a Fallen One") to the more upbeat aggression ("Riddle"), even allowing the listener a breather with the glistening acoustic instrumental "Remembering Those Lost". Each melody and synthesizer is well bred to accompany its minimal rhythmic substrate, and there's also a good variation to the track lengths which never crosses the threshold of tedium, even in the nearly 8-minute finale "In Monumentum/Stone of the Ages". The production is polished without feeling overburdened by its glorious epicenter of atmosphere, and the lyrics are about what you'd expect. In terms of a comparison to For the Glory of UR, it succeeds for wholly different reasons. That was more of a traditional black metal effort, while this is more for the pagan/epic sect. Not the first album of its type that I'd immediately break out for a fix of barbarous antiquity, but where I might have given this an average grade upon first exposure, it's gradually grown upon me.