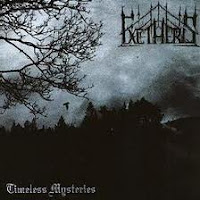 Were I not so engrossed in a chronological study of Hellenic black metal, researching databases and seeking recommendations from fans of the niche, Timeless Mysteries is an album I might not have ever encountered. The one-man show of 'Lord Exetheris', who performs vocals and all instruments, Exetheris has written a number of demos and appeared on a half-dozen or so split records since its 2004 inception, but this is the sole full-length to date. A pity, really, because even if this isn't counted among the impressive debuts I've heard in its field, there is a particular hypnotic and neurotic quality to this music which I don't often experience, clinical and clamorous like a swarm of black metal wasps seeking something to sting before the termination of its brief existence.

Ironically, brevity is not a strong point for Exetheris, and most of the tracks on this album span on well past their threshold of welcome. Not due to repetition, as "Crowning with Emptiness" endeavors to prove with 12 and a half minutes of tempo changing, gloomy atonal variety. Dense, deep throated guttural snarls drift over slow, mid and hyper sequences producing an equally unsettling environment which makes the listener feel as if he/she has come off his meds and is gazing out upon an alien landscape. "The Burning Light", another lengthy sojourn into madness, fluxes between needle-like, disorienting near-melodies to chugging, almost Voivod style thrash breakdowns. "Divine Misery" transforms from a spacey, disjointed guitar/bass intro to a thrust of industrial/black metal graze, amplified by the use of the drum machine (throughout), which sometimes functions to the album's benefit and sometimes does not... And "Souls Murdered by Choice", which is my favorite piece here, gradually gathers force from its paranoid, dissonant textures to the baleful bridge-blitz, and then subdues into strange, atonal synthesizers.

Yes, this is definitely one of those releases which belongs in the 'fascinating if not really good' category, doped and drunken and disconnected from the derivative Scandinavian worship of so many of Lord Exetheris' countrymen in the 21st century. If the man could craft this precise style into better individual riffs, with some improvements in either the drum programming (or using an actual drummer), we would be heralding one of the most important new forces in that scene to have arrived in over a decade, but Timeless Mysteries is unfortunately just not that good. It's intriguing due to its internal diversity and divergence from the genre standards of predictable tremolo picking melodies, but not something you want to repeatedly experience. That said, I'd be lying if I said I wouldn't be excited to hear what Exetheris might come up with next...