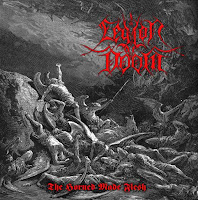 Legion of Doom had already released a few good albums in their earlier years, namely Kingdom of Endless Darkness and For Those of the Blood, but neither was necessarily outstanding, just a decent and competent foray into a mildly symphonic style of Norwegian and Swedish styled black metal with reasonable production qualities and solid riff-writing. Call it a 'maturation' if you will, but The Horned Made Flesh attempts to further integrate these classical elements directly into its storming metal core, and succeeds, easily supplanted its predecessors as the band's best. However, I should say that if one is not interested in the mid-90s eloquence bands like Emperor and Dimmu Borgir incorporated into their classic records, then The Horned Made Flesh is not apt to change that opinion.

Still, it's quite good, a natural copulation of cosmic and mythological themes with melodies of bewitchment and grandeur, and the entire album is fairly pleasant to listen through. In fact, outside of Daimon's pernicious rasping, I'd daresay that this was one of the more 'accessible' Greek black metal records I've heard, and by no means do I mean that as an insult. Everything is superbly and professionally mixed, from the sweeping orchestral synthesizers to the clean and distorted guitars, drums and vocals. But fear not, because Legion of Doom haven't lost that edge of aggression required by their genre; tracks like "The Astral Ur" and "Sacred Spirals" still blast along with muscle and finesse, and the construction of guitars is not a far cry from For Those of the Blood or their third, less impressive album God is Dead. Though none of the songs here is so bloated as to wear thin its welcome, I was actually impressed by the more spacious tracks like the 7+ minute "Serpent of Caduceus", with its yawning, ritual intro and eerie chanting.

They've also included an update to "For Those of the Blood" from the album of the same name, which is streamlined here with the newer content through the production, but fits in extremely well. The Horned Made Flesh does have one mild weakness in that a lot of the riffs are not the sort that could support themselves without the flair and fashion of the orchestral ingredients, instead cut from a pretty stock array of Scandinavian style chord maneuvers in the dark, but then, you're not being asked to listen to them independently. In short, it's not full of instant thrills, or highly memorable melodies, but something that must be taken as a whole. It might feel a decade out of place (most of their albums do), but there is no questioning the consistency and professionalism with which Legion of Doom produces their material, and The Horned Made Flesh has set them a new waterm...err, slaughter-mark to surpass.