Dodsferd - Death Set the Beginning of My Journey (2008) 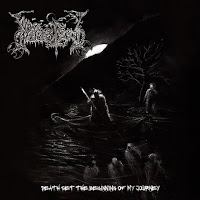 Dodsferd might have taken a few years and albums to rise into prominence as one of the more reliable, raw Hellenic black metal acts following in the Scandinavian traditions, but arrive they did with the decent effort Cursing Your Will to Live. It was a faster and fare more punishing concoction of it's full-length predecessors, and even though the concepts of innovation and originality seem to entirely elude the band, it was violent and entertaining enough to pass muster. With Death Set the Beginning of My Journey, you get what feels like a more tight and controlled effort, but it does not lack for the vicious speed and strength of Cursing, and ultimately this stands in my opinion as the strongest of their albums yet.

For one, I enjoy the fact that Dodsferd decided to kick the narcissistic early Darkthrone worship to the curb and include some proper cover art (much like the Norwegians eventually did), since it was growing a bit exhausting. Death Set the Beginning of My Journey is thus immediately ready to be taken seriously, even though they've kept those ridiculous long song titles from Cursing. In their defense though, they at least prove amusing: "You Were Talking About a Kingdom; What the Fuck is That!!!", "The Day You Will All Rot, I Will Forever Bury My Hate", "Suicide Was Created By Your Incompetence", all unintentionally humorous, though they've got nothing on "Light is Darker In This Swamp". Names aside, though, the material is quite bright, raging and fresh in its execution, from the rampant streaming hatred of "You Were Talking..." through the harsh barrage of "Suicide...".

I like the bass tone here, thick and present, a good counterbalance to the higher pitched tremolo jamming and the Varg-like screams. The melodies tend to function without feeling glorious or warm, purely hostile as a river of blood. That said, the final two songs on the disc are the most diverse, and happen to be the best, despite being more accessible. "Light is Darker In This Swamp" features some cruising, evil rock rhythms and a powerful rush of melodic chords over what are the most climactic, tiered howls and screams of oppression anywhere to be found. The title track is both dreamy and dissonant, with an almost post-punk or post-black subtext to the guitars that crash and careen through the vortex of reprehensible vocals. Both are effective enough that I'd consider them among the finest in all of Dodsferd's career.

If there can be any complaint, it's that once again there are several tracks that feel excessively meandering and lengthy without any cause to be. Three of them are over 8 minutes, with too few ideas to support the structure, including "Light is Darker Than the Swamp", which is 9 and a half minutes but could have been just as poignant in six or seven. This is a typical misstep in black metal, and not totally harmful to the quality of the music, but a touch more complexity in the writing might have helped fill the emptiness. Of course, emptiness is one of the modus operandi surrounding a band like this, so the listener's tolerance for such dire mileage may vary. But otherwise, Death Set the Beginning of My Journey should have a reasonable appeal to the crowd that closely follows the first four Burzum records or Darkthrone circa 1993-4, and it's the first album in the Dodsferd repertoire that I'd reach for on a whim.