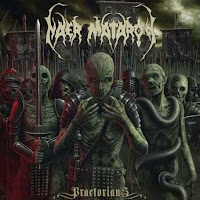 Going by the excellent cover artwork and the thundering percussive intro/march "Anti-Celestial Campaign", I felt as if I were in line for a total beating at the hands of Naer Mataron. Would they deliver at last the long anticipated scathing that we always knew they were capable of but never seemed to manifest? Or just another competent assembly line of blast beats, snarls and familiar tremolo melodies cut from the bloodstained cloth of their Scandinavian forebears? Sadly, Praetorians falls closer to the latter camp in terms of execution, but that said it's still one of their brutal and memorable albums when looking back over their entire career, rivaling their debut Up from the Ashes in quality.

Once the smoke of the intro clears, you get a surge of blasted, stock black with writhing chords strung alongside samples of warfare and bloodshed ("Ostara"), par for the course if you'd heard their previous album Discipline Manifesto. However, there's a particular punchy vibe to both the drum tone and lower, muted guitars where and when they appear, which feels strangely vibrant and punishing. Vicotnik's vocals are cast in a constipated grime, and they use backing shouts and layered rasps to create this panoramic, battlefield effect that suits the music. I'm reminded of perhaps a gnarlier mid-period Marduk, with a lot of those riffs that feel tight in construction but not incredibly memorable in the long-term. Still, pieces like "Incarcerating Gallantry" and the "Eagle's Nest" bristle with venom and hatred, a few winning guitar lines carved into their surging flanks. They've also got a few more black/death hybrid tracks like "Sol Invictus", and some more spacious, indulgent and narrative epics like the closing title track.

Aesthetically, I really enjoyed the lyrics which are choked with poignant and penetrating images based both in myth and history, and again: the cover art is fucking superb. If only the writing had offered more of a payout to its surface qualities, Praetorians would have likely whipped up a great storm of respect amidst the underground. Like most of the Greeks' albums, though, it sadly seemed to fade all too quickly into the background, because let's face it, there is nothing novel happening here, just an hostile and acceptable broth of brutality which soundly covers its genre's groundwork. Naer Mataron are not remotely boring, they write a lot of variation into their tracks and go for a more expansive concept than many of their peers, and Praetorians is a step above some of their past works like Skotos Aenaon and River at Dash Scalding, but it's not the total soul crushing that I have felt this band was capable of 14 years deep into their career. But that day might still come...