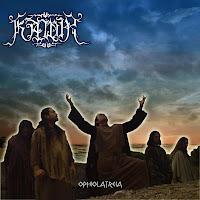 Long departed from the crude charms of their debut To Cavirs, Kawir had gradually developed themselves into a competent and well produced black metal band with remnant traces of their original, cheesy pagan/symphonic ingredients. That said, Ophiolatreia is probably the closest they would get to their formative years, with a wealth of slower, atmospheric sequences that contrast the raging Scandinavian elements of their sheer, symphonic black metal riffs. There are quite a few derivative, generic feeling guitars on this album that hold it back from greatness, but overall I'd say this is still a solid effort: what it lacks in overall charisma it almost makes up for in sheer muscle.

There are actually a few moments in tracks "Moirae" and "Poseidon" which have fine, layered vortexes of guitar that I wish would have occurred more often through the album. "Poseidon" is hands down one of the best songs, with an extended bridge in which the Greeks use percussive acoustic guitars and airy flutes alongside whispered vocals to create this feeling of an ancient countryside journey, perhaps through the architecture of old. They also use a lot of clean vocal chanting here and throughout many of the tracks, which feels a bit goofy in spots but certainly matches the aesthetics they are attempting to achieve here. But countering this, there are an excess number of barbaric guitar riffs which feel cyclic, predictable and repetitive to the point that they lose their luster well before the track ends ("Hephaistos", etc).

Without exception, it is the more elevating and atmospheric fraction of the album which holds it all together. The majority of the vocals are a dry and expected rasp all too common within this style, and hardly more expressive than any of a thousand peers. The lyrical themes remain firmly enveloped in Greek mythology, and yet I always had hoped Kawir would surpass their peers and release the ultimate tribute to their country's rich roots. This just isn't that, and in fact, none of their albums are, so what you're getting is essentially stock black metal with a few twists of originality, reasonable production values and not much else to thrive on. Falls a little short of its predecessor Arai.