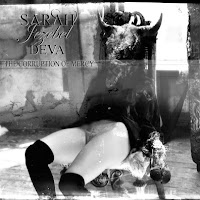 It's gotta be a difficult move to exit the sanctum of popular touring acts and forge ahead with a solo career, but that's precisely what Sarah Jezebel Deva has been after for a few years, kicking off with the lackluster debut A Sign of Sublime, in which she asserted her classical, operatic presence over a smattering of Gothic and black metal cliches. The Corruption of Mercy has landed a couple new musicians in her fold, and seeks to intensify her brand with another gallery of blast beats, layered vocal arrangements, and frankly overproduced symphonic synthesizer arrays, all of which contribute to a pretty jumbled mess of a sophomore, with little redeeming value despite its complex ambitions.

For one thing, I just don't care for her voice. When it was providing a single, shrill melody in the midst of a Cradle of Filth track, I had no problem with it. But here, left to its own schizoid craftsmanship, and backed by both male and female opera swells, it's just not working for me. In particular I don't enjoy the contrast of her lower range against the ferocious onslaught of modern black metal rhythms in "No Paragon of Virtue", especially because it's misleading, and you will find very few blasted sequences throughout the rest of the album. In general, the material tends to be the pompous, sweltering sort of Gothic/black metal hybrid, with a lot of guitar rhythms that follow in the steps of slower Cradle of Filth or Dimmu Borgir.

Jezebel can definitely come up with some quality lines with which to ply her trade ("Sirens", "Silence Please"), and she's about the closest a metal front woman can come to a banshee without outright killing her audience, but the symphonic keys are far too overbearing here, too obviously digitized and produced with the lacquer of a Castlevania soundtrack on the original Playstation (and not a very memorable one). Still, even when she hinges on the most creepiest passages, the layering of the vocals in the mix comes off entirely overwrought. Her backing musicians are all competent enough at their respective instruments, but it's clear they are meant to take a back seat to the vocals, and the result is something like a more manic, alternative Therion without the infectious sense for composition that marks their earlier work (Deva herself has performed with them).

I suppose if there's an audience for this at all, it would rely heavily on the fans of faerie metal royalty like Nightwish and Epica, other bands who jam a bit too much cheese into the architecture of their output. Or perhaps Deva's British alma mater. You know the one. The cover of The Cranberries' "Zombie" might seem like a natural fit, but it's ultimately comical, as are the lyrics throughout practically this entire album (with one or two acceptable exceptions), which read like angsty Pink-pop in a lavish black fishnet shirt. Check out the brilliant prose of "Pretty with Effects", if you don't believe me. What is this, kindergarten-core? Ultimately, The Corruption of Mercy plays out like a shooting (sinking) star, a crass commodity of generic extreme metal characteristics rolled up into a dorkestrah of not so fiendish, cookie cutter delights. With a stronger guitar tone, and less of the dubbed-in vocal harmonies, this might have lit a brighter fire, but it seems all too frivolous and distraught.