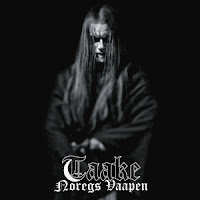 With most of the scene's progenitors having mutated their styles to incorporate a wealth of newer influences, 'sold out' or dissembled entirely, it's amusing that it falls upon a band which wasn't even releasing full length records until the dawn of the 21st century to maintain the backbone of Norwegian black metal. Ørjan Stedjeberg (aka Hoest) has always been the very definition of reliable, producing album after album of quality material that has earned him both the respect of the old school and the admiration of a new generation; that pays tribute to its countrymen and influences without ever seeming a shallow rip-off. I mean, if my biggest gripe against an artist is his narcissistic tendency to flaunt himself on album covers, then I think he's in pretty good shape, though even I'll admit that the image adorning the eponymous Taake, his last album, was pretty cool (not to mention the music, which was outstanding).

So then, it is basically no shock to anyone that Taake has once again made good on this genre, and Noregs Vaapen is another refined, balanced assault of those sacraments held dear to the black metal fan. Incredibly well-plotted songs which never cease to provide variation and excitement. Proficient and explosive musicianship. Audible, digestible darkness set in contrast to incendiary desperation and melody. Hoest brings on a whole 'host' of guests to the album, such as Nocturno Culto, Demonaz and Attila Csihar, but he still runs the show across the whole range of instruments, and provides a 47 minute excursion into a night realm of slaughter and beauty, its ego carved upon the natural landscape and the continued decay of mankind. You don't really come to Taake through some quest for novelty or innovation, and surely there are elements here from all of the Norse regulars (Mayhem, Darkthrone, Satyricon, Enslaved, Immortal, Burzum and so forth), but hell, if SOMEONE is to do them justice, it might as well be this guy.

And he does so immediately, through the streaming and bleeding discourse of "Fra vadested til vaandesmed", in which his biting rasp cuts across a series of understated, but forcefully eloquent guitars, expressive drumming and perky, meandering bass lines. The song hits and subsequently bulldozes over a wall at around the 2 minute mark, when it sets up a mid-paced slaughterfest of cruising black/rock chords that will have Hellhammer and Darkthrone fans weeping blood tears of joy...and yet there are more thrills to come, with another brick rock riff and then some sinister, playful strings added to the later re-acceleration. It's this constant variety which allows Noregs Vaapen to burn itself into your mind, and there are no two tracks quite alike. Standouts are omnipresent, but I might call attention the spacious and bold grooves of "Nordbundet" (from the Kveld EP) with its slicing dissonant spikes and hell-blazing rasp; "Myr" with its intense, constantly shifting bridge; or the dire and crushing, doom-like attire of "Helvetesmakt".

But really, there is not a stinker in this bunch. Perhaps a few guitars here or there feel familiar and obviously derivative of hundreds of black metal records in the past. Not all are winners, but more often than not they hold up to repeated scrutiny. I'm just highly impressed how well he writes his songs to essentially remove any chance of losing the listener's attention span. The production values are superb without ever threatening to feel digitized or suffering from an excess shine-job: you can hear everything loudly and clearly, no less emotionally draining than it would be if it sounded like it were recorded in a closet. The Norse lyrics are delivered with an appreciable level of dread, but more importantly he doesn't waste his presence away through dull, repetitive patterns, sticking instead to restrained quantities of syllabic deviation. In the end, even if it doesn't scale those same leering heights that Over Bjoergvin... or Hordalands Doedskav did when I first heard them, Noergs Vaapen is another excellent Taake effort and even slightly superior to its s/t predecessor. Hard work pays off, in metal and in the rest of life.