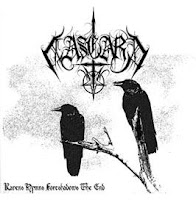 Aasgard's 2008 EP Nyx was nothing special, but it did offer a filthy and repulsive take on the Norse formula black metal that has inspired countless thousands of acts to take up the corpse paint and go howling through the dark. It's followup, Ravens Hymns Foreshadows the End, might seem an exercise in poor pluralization, but at least it's rugged, raw, and pissed off to the point of hilarity. Continuing their crude approach to production, they've created a clamor of primal black rock riffing to accompany the ridiculous but direct nature of the lyrics. Aasgard fucking hates everything, and this full-length debut, while the antithesis of a musical marvel, at least gets that part right!

I mean, just look at some of these lyrics: 'to rape your fucking god is my desire/fuck your god/Jehovah has my penis in his ass/whores/you are only bastard shit of rats and worms.' The Greeks are not fucking around here, sugarcoating nothing, letting it all 'hang out', all that venom and seething vitriol, and no Christian or Hebrew shall be spared. As cheesy and unrefined as this might seem, it's at least not hiding anything. You know where you stand with Aasgard, even if that means standing at the wrong end of a sword. Musically, however, the album sort of slips into the same banal monotony of so many others. The songs seem to cycle between mid paced dirty rocking fare ("Sodomized the Slave of the God", "Elevation of Satanic Lore") and streaming blasts of chaos ("Rising Swords in Paganland", "Tragos adi eis mnimi necron"). The way I hear this, since I can't really expect much in the way of intricate or memorable riffing, than the grimier the better, and here that is "Goatwar", which provides quite a racket of evil despite it's languid gait.

Let me be clear: Ravens Hymns... will not hold an appeal for anyone seeking the symphonic of the enlightened side of black metal (though the intro and finale involve some dark ambiance). It's as primitive as they come, mirroring bands like Von or Beherit in their formative years more than Emperor or even Burzum. This is spiteful, inept and unforgiving aggression from a pair of dudes who just don't give a shit. If that forms a basis for your listening needs, then by all means, grit your teeth and bear this. Personally, the one thing holding me back from enjoyment was not the threatening lyrics or the raw tone, but the absolute lack of distinctive guitar riffs of any sort. At heart, I'm a metal guy, and with very few exceptions, I need those guitars to do something worth my attention. This is not that sort of metal: it wants to kill you, not impress you. But as fun as that might sound, it doesn't always make the music worthwhile.