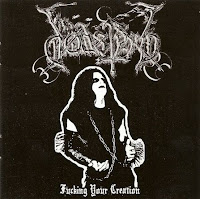 I had mentioned in my prior dismantling of Dodsferd's 2006 debut Desecrating the Spirit of Life that he would improve throughout the latter half of the 'oughts, and it would not take long. Inking a deal with the Moribund Cult seems to have done the trick, and sophomore Fucking Your Creation, while still a long way from the caliber of composition one expects of cult classic black metal efforts, destroys its predecessor on all counts. Simplistic, punk-inspired black metal with a more straightforward guitar tone and songs that actually attempt to GO somewhere, even if they don't necessarily succeed in some cases. I could do without the corpse painted cover posturing, which got old when Darkthrone, KISS and King Diamond did it more than a decade before (and in fairness, Wrath dumped the practice after 2007), but at least this album actually 'feels' like the rambling madness of a malcontent, where the last was laziness defined.

Much of Fucking Your Creation revolves around a pair of center piece tracks that are far too long for their own good. "...And Disease Was Spread in a Matter of Seconds" is almost 11 minutes, opening with a volley of mean punk riffs slathered in his feral rasping, and then accelerating into the streamy Scandinavian variety of black metal pioneered by Bathory, Burzum, Immortal, and Darkthrone. "I Was Welcome Only By Death" trumps even this, with 12:30 minutes of mid-paced, wrist-cutting rushes of melodic, desperate surging. Neither of these is a bad song, per se, but they fall into that familiar trap of becoming unable to support their own swollen weight. Simply snip out a handful of the better riffs, fashion them into 3-4 minutes of momentum and give it a rest. There's nothing surprising or climactic or even monotonously mesmerizing about what lies in wait at the 6 minute, or 9 minute mark...so there is really no impetus for the listener to suffer through all that empty space and lacking variation.

When we come to the title track, though, or "Wrath", which I assume is some sort of statement, the tracks are a more manageable length of 6 or 7 minutes plus change. There's a pretty nice, soaring riff in the center of "Fucking Your Creation" which felt pretty cool with the expressive drumming and incessant snarling, and I enjoyed the droning, griminess of the self-tribute. In general, the drums throughout the album are far superior to the debut, offering a more organic and versatile undercurrent to the bleeding depression Wrath has in store for all who follow his music. The production is bright and raw, and the compositions more accomplished and tactile, even if they're hardly anything novel and sound like a hundred or so other artists to have come before. Fucking Your Creation is hardly a memorable experience, but it's at least consistent enough to run with the pack, rather than nip at their paw prints begging for regurgitated scraps of carnage.