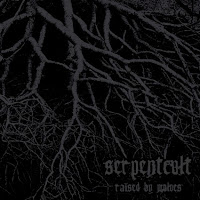 Belgium's Serpentcult made a good sized splash a few years ago, along with California's Jex Thoth and Canada's Blood Ceremony, as a budding artist in the field of crushing doom. What did the three bands have in common? They were (or are) all fronted by females, something that had to that point been an admitted rarity. Well, three years post-Weight of Light, the Serpentcult siren Michelle Nocon has left the fold, and the band has moved, as a trio, into a somewhat different direction, which I'd brand a darker but accessible extension of the stoner and sludge genres, occupying a niche somewhere near Eyehategod, High on Fire, Ramesses, Electric Wizard, but with a little more underlying groove to the ritual mesh of depression.

Raised by Wolves is but four compositions, ranging from 8-11 minutes, and to their credit, they never let any particular stretch of material drone on to the point that it's some mind numbing attention killer. These pieces play out like individual stories, and yet they're wholly consistent with one another in terms of the fat guitar tone and sparse, bitter vocal rasping. I admit that I found the latter half of the album more engrossing than the former. "Longing for Hyperborea" has an almost grunge or post-hardcore aesthetic below, a minimal groove that flows into the escalating, melodic chords, but what truly captivated me is the bass guitar curving beneath, and the creepy ambiance and drumming of the bridge. "Growth of the Soil" is also quite organic and jammy in nature, with segues of depressing clean guitars that take the listener's hand and lightly guide him/her into the crashing waves of clamor and chaos.

The other tracks are more or less the same style, but while there are little bits and pieces that I appreciate, such as the higher pitched, psychedelic vocal stylings which feel like a paranoid mix of Mastodon and Neurosis, I wasn't quite as stimulated. In general, the guitar riffs are rather dull throughout the album, reliant more on their crown and fluid motion to envelop the audience, rather than interesting patterns. Meaty chords, basic melodic slides and very little contrast in note selection, and often not so bleak or dire as the cover art might insinuate. Not as energetic or propulsive as several of the debut's songs ("New World Order", etc), and the lack of Nocon's shrieking 'female Ozzy' presence is felt very early on. However, Raised by Wolves compensates for its dearth of freakout moments with a more measured, methodic negativity, though it's nowhere near the level of something like a Dopethrone, which makes me want to tear out my own organs with my bare hands and then stamp on them since we're so fucked anywhere. I'm not a huge fan overall of this grooving, sludge style, but certainly the Belgians are no worse for wear than they were for the debut.