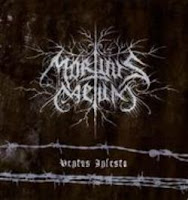 Another year, another Latin-titled black metal album for Mortuus Caelum, with no progress expected and none delivered. To be blunt, the plane between Ventus Infesto and predecessor Macto Interitum Mundi is so damned level that you could place a soccer ball upon it and it would not know which direction to roll. It would sit entirely still and scratch itself in frustration. But for those addicts who are forever enraptured to the basic underlying principles of the genre, it once again might just be enough to slide past into mediocrity. The nail that never deigns to stand out will never be hammered down, after all, so those seeking another average approximation of Darkthrone, Mayhem, Bathory and their ilk probably wouldn't turn up their nose at this.

I just found it immediately bland, saturated with derivative and unsurprising riff patterns that are so indistinct that the minor touches on the album, like the percussive smashing in "Cruentus Flumen Di Vita" and the bridge of "Unbridled Decay", or the acoustic break in the title track, seem to snap the listener right out of the almost hypnotic lack of direction. The plunking of the bass guitar and the bruised rasp of the vocals both hammer along with some consistency, and yet there is nothing internally distinct about any of this. It feel so laconic and unassuming in its execution, almost as if it were being written to meet a black metal quota. The longer songs "The Conquest" and "Extolment of Darkness", both of which hover about 10 minutes in length, take a few more chances than the rest, but despite their added variation they seem uninteresting and unwilling to end.

The best I can really say for Ventus Infesto is that the band is tight at what they do, and the production , if dull, is at least pretty clean and comprehensible. But the vocals, drums and overall composition is all too forgettable but when you can spin nearly any album from the initial 'Golden Age' of black metal (early through mid 90s) and come away feeling more satisfied. Had these Greeks even incorporated more atmosphere throughout the tunes, whether that be through samples, synthesizers or whatever, it might have proven a more worthwhile experience, but ultimately this one just gets too easily lost in the mountainous accumulation of its peers.