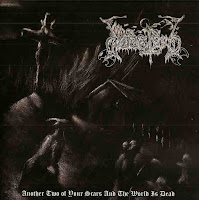 While its contents are not all that memorable themselves, it's at least a relief that Dodsferd would quickly drop the drawn out and dull aesthetics they created for the 2009 album Suicide and the Rest of Your Kind Will Follows for this new EP. As a band often labeled 'black & roll', I feel that this is actually one of the better examples of them executing such a hybrid. But for the most part, this is straight up black metal with a lot of variation. In fact, each of the songs on Another Two of Your Scars and the World is Dead is in a realm of its own in terms of inherent composition and intent.

"Only Thorns Can Embrace Your Condemned Throne" opens with a feedback and then a thick, distorted bass line which is pretty damn punk. The feedback continues to climb while Wrath barks out the lyrics in a mixture of rasped and guttural clamor, and then the solid, rocking guitars enter the fray. As the track progresses, it cedes into a bit of tinny blasting and then some melodic breakdowns, but in all it's comparable to some of the past records like Cursing Your Will to Live. I do think that the riff after the 3:00 minute mark is quite potent, but overall the song was somewhat of a dud. As for the title track, this is much different, a slow piece with resonant, sparse guitars and march like drumming, above which the vocals howl out with voluminous torment. The guitars eventually pick up in complexity, but the overall effect here is one of a morbid calm.

I much prefer the latter to the former, even if it still needed something in there to push it past the precipice of memorable. But frankly, I found it more appealing than ANYTHING the band wrote for Suicide... I also really like the two toned cover art a lot, the classical imagery really seems to suit the band's messy logo and dark, nihilistic aesthetic. Another Two... is of course a limited press 7" (through Obscure Abhorrence Productions), so not everyone will be able to get their paws on it, but it's not really essential anyway. The quality here sort of dwells in the middle of their discography, though it's cool that the band seem to continue to broaden their reach, even if not every deviation is a strict success.