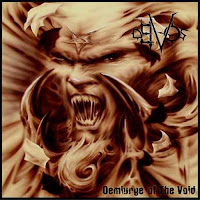 Deivos might not have made new in-roads with their latest choice of cover art, a stretched and diabolic facade all too close in tone to the prior two albums, but Demiurge of the Void is another practiced exercise in well-balanced brutality and technicality which should see their star continue to rise among the fields of modern death metal. The songs here come with such a concrete barrage of hostility that they can often feel overwhelming at first, but upon closer scrutiny they've still got quite a lot going on under the hood, and engine of progression and variation that operates with exacting devastation. Decidedly more brutal than their countrymen Vader, Behemoth and Lost Soul, this effort shows all signs that it will appeal to the follower of the heavily structured, acrobatic USDM scene currently exploding from the west coast.

Deivos hammers along at about a mile a millisecond here, and early tracks "No Gods Before Me" and "Code of a Dead Deity" seem about as subtle as a truckload of steel girders being dumped upon the listener's head, but there is intricacy to be found in their silky, psychotic leads and the grooving dynamics that materialize once the opening artillery pauses for reloading. I do feel that as the album progresses, the songs become slightly stronger, with a clinical substrate of neurotic riffing inherent in "Born to Loathe", "And the Word Became Flesh" and the impressive, mechanical rigor of finale "Panacea", but this largely relates to the shift in opening strategies and superior note selection rather than any inconsistencies. Of the eight tracks, there are none exempt from the Poles' brutal athletics and the pure bludgeoning of 'Angelfuck's' delivery, save for where they incorporate brief seconds of ambient or industrial effects (like the closeof "And the Word Became Flesh").

On the whole, I did not find Demiurge of the Void quite as potent as Gospel of Maggots, simply because there were less riffs worming their way into my memory. The styles between the two are clearly comparable, though this album ultimately seems simultaneously faster and less schizoid. Still, the production is pretty clear, callous and calculated like much of the modern tech death internationally, and the performances are spine wrenching. Deivos might not seem the natural frontrunner of the Polish underground, but along with peers like Nomad and Calm Hatchery they certainly represent a solid second string for the superstars of that scene, and it's a bit irritating that something like Decapitated's latest, an exercise in futility and mediocrity, will get any attention at all while Demiurge of the Void languishes in obscurity. This is the REAL Polish death metal, people. It might not singe itself upon my brow eternally like the new Vader, but the effort here is inarguable, and brutal death knights the world wide should be penning Deivos in to their schedules of attention.