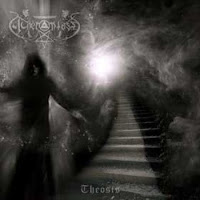 In about 13 years of recording and releasing music, I'd have to say that Theosis is the finest hour of the Greek conjurer Acherontass, surpassing not only the Acherontas debut Tat Tvam Asi (Universal Omniscience) in quality, but everything else. Better than the side projects Acrimonious or Nihasa. Certainly better than the band's prior incarnation, Stutthof. At the same time, it's also not exactly a deviation from the formulas he was creating on many of those releases, it just handles everything that much better, from the blazing tangle of melodies to the exotic, occult atmosphere being wrought from the lyrics, orchestral segues, and the practiced implementation of variation between tracks to that this doesn't come off as another ribald blast-fest to nowhere.

Yes, Theosis still draws its influence from the same sources of Emperor, Marduk, Mayhem, and other infamous North machines, but it treats the niche with an elegance that the members' former recordings only attempted. From the raging, layered depths of "Pestilence of Mortality" with its subtle, plunking bass lines, to the measured, nightmarish slog of "The Winged Skull Rising" which manages 9 minutes of content without the listener getting bored. Acherontas has at last achieved their capability as a veteran of the field. Each track, even those that are not entirely catchy, shows clear intricacy in its craftsmanship and composition, and they've very carefully broken up the momentum of the metal pieces with lush, scintillating ambient pieces like "Dream of Adam Kadmon", one of the most absorbing pieces here. Another winner is "Finis Coronat", with its glorious bouts of speed, escalating orchestral backdrop. Or "Apethantos": when it hits that groaning, clean vocal alongside its dissonant guitars after the 2:00 minute mark, you know that greatness if very near.

This is also not some overproduced mass, but a pretty thinly sliced selection of ingredients which work wonders in tandem. The drumming is dead accurate whether the band is blasting or reducing itself to an atmospheric crawl, and there are so many melodies present that the album becomes a matrix of near-complexity. The bass is not exactly blaring, but nor does it follow along with the guitars so closely that it loses its identity. The lyrics are largely self-centered examinations of both the spiritual interior and the cosmos at large, but they also take a few meters to trample the follow of modern, organized religion ("Pestilence of Mortality"). Maybe Theosis is not the most memorable of Hellenic efforts I've explored through my research, but it's a quality culmination of a career that promises even better in the future.