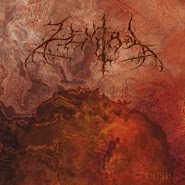 I know by now not to expect anything on any subsequent Zemial record to closely reflect that of its predecessor, and while the new Dusk EP maintains the core black/thrash principles of their 2009 short player I Am the Dark, it's far better managed, with more complex guitar lines and a reminder of some of that epic architecture that the band manifest for their 2006 full-length In Monumentum. The pair of tracks present here span all over the metal spectrum, but they do it quite well, and I'd be lying to deny that this is perhaps the best one two punch in their entire catalog...

There is just so much happening here. "In the Arms of Hades" begins with a thrust of wonderful, well constructed black/speed/thrash with impressive, barking vocals that possess just the perfect amount of reverb. You'll hear Bathory, Sodom, Venom, and even Tom G Warrior in there among others, but after only a minute Archon begins to implement these graceful, grazing melodies that seem torn from a scene of the ancient world. Briefly past that, it goes into this epic, heavy metal march sequence, slowly layers in clanking percussion, and then returns to a twist of melodic thrash before petering out into wispy melodies. My only regret is really that it doesn't bring back that voracious opening sequence in any meaningful fashion. But the other track, "Cries Behind the Golden Walls", compensates with more of the band's tiny, epic melodies flowing over a glorious mesh of Manilla Road and Bathory...

It's enough that by the time the 14 minutes were up, I was certainly craving for more. Each tune is captivating and versatile, and yet another solid nick in the belt for one of the more enduring Hellenic outfits. I'll tell you this: if Vorskaath could get his ass in gear and produce a full-length like this in the coming years, it will have a broad appeal, between both the old school epic heavy metal crowd and those who fancy some creativity in their black or thrash metal. Not a lot of bands are touting a hybrid like this, and it's very effective, even if the tone of the melodic guitar does feel a bit wimpy.