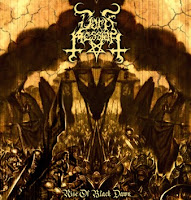 As soon as the opening tremolo riffing begins to explode off of the rhythm section in "Religious Sheep", it becomes obvious that we're dealing with another pretty stock black metal band in the Northern European tradition, redolent of the sounds of Mayhem, Marduk and their various constituents. However, Rise of Black Dawn does turn in a moderately competent performance of its type, with tightly blasted melodic guitars, present and plunking bass lines and vicious barking vocals that sound like a dog of unholy war, its throat sated on the blood of Christian opposition. I give Dark Messiah some credit, because the songs actually feel as if they're going somewhere, and there's plenty enough variation, but the guitar patterns do inevitably feel familiar and winding along the too-trodden paths of a great many luminaries in the field, and the EP is ultimately not so distinct.

For example, with "Religious Sheep" and "Antichristian Sins", you pretty much know where the primary guitar is headed as soon as you hear it, sort of like an Mayhem or Dark Funeral track at random. It's really not that exciting. However, there is an added layer of depth at play when the band get to their bridges: "Antichristian Sins" incorporates some squealing, popping licks over a martial gait, quite similar to what Rotting Christ were writing for Non Serviam or Thy Mighty Contract. "Black Storm of Hate" abandons its vapid, blasted verses for another of these more controlled, melancholic fixtures, clean vocals echoing across the center snarl. "Mirrored Reality" has a steady, ritual swagger to its own bridge which also stands out among the faster fare. So Rise of Black Dawn is pretty far from monotonous, and it's clear the Greeks put a little work into the construction of their cross-burning hymns.

In the end, I'd probably only recommend this to those with a huge chubby for the Swedish scene, because I was constantly thinking back on records like Secrets of the Black Arts, Opus Nocturne and Far Away from the Sun. To that extent, it's not a bad way to kill 20 minutes. The material never quite wear out its welcome, and its vicious and densely produced enough to satisfy fans of those bigger budget, Abyss-studios (etc.) works of the mid 90s. That aside, a lot of the guitars in the high-paced sequences go straight in one ear and out the other, and the sacrilegious themes and lyrics are all the sort you've heard before, if no better or worse.