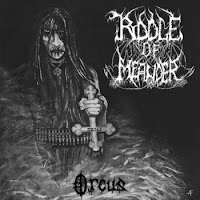 Albums named after daemon princes have a particular standard of menace and diabolism to live up to, and I'm not sure Riddle of Meander's sophomore outing justifies itself with quite enough of that craven hostility. Sure, it's a brutal, fast paced record with grimy vocals and thick, fuzzy riffs over almost constant blasted acceleration, but it becomes monotonous in very short order, and does not only fail to live up to its title, but even to match their 2006 debut, End of All Life and Creation, which was admittedly decent. I can get over the cartoon-like, bullet-belted posterboy with his inverted cross and spiteful glare, but I just can't get past how tedious the music becomes with such a dearth of variation. As hate fueled and hyperactive as it often sounds, Orcus just doesn't earn its name.

I often became more enthralled by the steady barking, bloody sounded vocals than the music that was ramming along beneath them. Sure, Riddle of Meander have riffs aplenty in their retinue, they don't simply hammer along the same course for 5 or 6 minutes at a time. The guitars have a structured formula that they follow, though they at least switch notes. But there is a general lack of rhythmic variety in pieces like "I Am the Key and the Gate" or "Incruente Immolatur" which leaves much to be desired when one is spending 5+ minutes listening. Better are tunes like "Maniacal Possession", which at least has a functioning breakdown, or "Eclipse in Witchcraft", which crafts a hellish, glorious march melody into its bowels. They don't always just blast endlessly, mind you, they channel in a lot of double-bass slowdowns, but the riffs that manifest in these sequences are themselves hardly noteworthy.

In general, think of a mixture of Ulver's Nattens Madrigal with a more forcefully produced band like, say, Marduk. You get that fuzzy, textured distortion of the former at a far higher standard of production, but with the latter's old tendency to whip out acceptable riffing that seems a few twists and turns short of burning itself into your brain. As an example of faster paced, tightened precision and utter spitting vocal blasphemy, Orcus is no slouch. I enjoy the resonant hostility of the vocals, and the production in general. But the guitars simply don't weave themselves into patterns that threaten or titillate the memory, so in the end we've got yet another average and samey feeling record which, in a younger genre, might have developed a cult following. But here, almost 12-15 years too late, it just doesn't possess the staying power it needs, even if there is nothing necessarily bad about it. Go for the debut over this one.