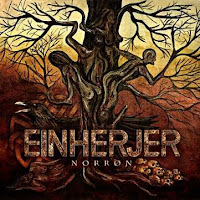 My personal fondness for Einherjer's back catalog begins and ends with their Leve Vikingånden EP (1995) and Dragons of the North debut (1996), the latter of which was a firm marriage of sweeping black metal aesthetics with melodic Viking riffing and high production standards that often bordered on cheesy. Nonetheless, it had strong songwriting and promised the world for this Norse band, who would have been likely destined to dominate the 'accessible' Viking/pagan metal sphere over acts like Thyrfing had they continued in that direction. Alas, there was Odin Owns Ye All, an unnecessary rocking of the boat which felt silly and uninspired by comparison, and the other full-lengths they released before breaking up (Norwegian Native Art and Blot), while superior, still felt underwhelming.

Four years after mooring their longships and stowing away their oars, Ulvar and Grimar have returned with longtime guitarist Aksel Herløe for another attempt at pillaging all shores, and the result is a steadily paced, plodding affair which is arguably even more user friendly than any of their prior efforts. Simple, pumping guitar grooves are used for ballast to support the epic choirs, potent vocals, glazes of synthesizer and minimalistic lead melodies, and the overall effect is somewhat akin to the Neue Deutsche Härte bands of Germany, only more serious in tone and not nearly so dorky and theatrical. The guitars are almost entirely void of complexity, chugging along muted on the bottom string to provide a suitable setting for hurling hammers, pounding mead and spreading the Viking panic to any village in its path. The name of the game here is 'swagger', with lots of hoos and has and grunts and manly evocations that at the best of time get the blood shifting in the veins, and at the worst incur the belly-rumbles of unintentional comedy.

That's not to say that there is a lack of variation here, because the vocal arrangements and the keys are used to the best possible effect over such lazy guitars, and the album honestly relies on such to provide any modicum of entertainment. "Naglfar" jaunts along with such testosterone that you can close your eyes and envision Kirk Douglas chucking axes and climbing drawbridges, while "Atter På Malmtings Blodige Voll" has a nice sense of elegance and escalation which almost seems the antithesis of the rest of Norrøn, and they even bust into an old school blast beat here with streaming notation (my favorite track here). Those that enjoy the band's occasional use of acoustic guitars won't be let down, as songs like "Balladen om Bifrost" use them to adequate effect between bouts of crooning. But then, there are a few mediocre pieces: "Norrøn Kraft", the nearly 13 minute opener, a half-empty 'epic' in which the thrills seem too far and few between, even if it's pleasant enough background noise. "Varden Brenne" has a bridge melody and vocal chorus which makes the remainder of the tune sound bland. "Alu Alu Laukar" starts to function as an accessible foot stomper and then disappears a little too quickly.

I actually came away from Norrøn with a similar feeling as I did to Kampfar's latest, Mare. A once proud and promising Norwegian band, lyrically and thematically devoted to the beautiful mythological and historical concepts of its homeland, but all too watered down and modern. The opposite of Enslaved, basically, who have grafted such themes into a brilliant palette of quality and progression. With Einherjer, at least there is a precedent, as I've felt a similar pall over their last three-full lengths, but it doesn't seem to have improved with age. Norrøn is a proud, inoffensive work which takes few risks, and reaps few rewards in the process. The mix is full-bodied, earthen and booming, and there a few smile-worthy moments that should snag the attention of any pagan into the bigger budget folk metal scene, but I came away underwhelmed, especially by the guitars. At least it's superior to Odin Owns Ye All.