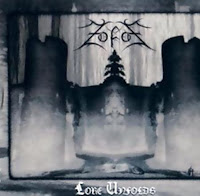 Zofos is a side project of Wolfnacht's Athalwolf, exploring a more ambiguous, mystical and symphonic side of the black metal spectrum than he had by this point written for his mainstay. Having proven through Heidentum (2002) his capability for strong writing in the style, he has created what might damn well be the best recording in his history, void of the punk and NS influences I would've expected. There is still quite a bit of surging, Scandinavian melody inherent in the compositions, and yet I might also compare this to the 21st century records of countrymen Rotting Christ, in particular the use of the choir samples to support the storming but restrained blast beats. Quite atmospheric and engaging.

Lore Unfolds is immediately alluring, the passionate force of "Wolfscarred" engraving itself into the listener's memory with escalating, memorable sequences of chords, tinny meticulous drums and of course the synthesized choirs. But it's also clever enough to not to endless repeat itself, so there's a great bridge and post-bridge riff that hit a median stride. Others follow this formula of speed and grace, including "Encounter with the Sylvan Gods" and the longing "Eidwlotreia", but I also found the slower, more atmospheric material to be engrossing. "In Ambient Natrue" is nigh on 10 minutes of gradually developed, wholly immersive melodic black metal, with its fair share of gleaming keyboards and sure-footed, driving chords. "The Gate to Untrodden Lands" has a gloriously, spiraling riff and some deeper, downtrodden Gothic narrative vocals which reinforce the lamentations of the guitar. These are also used in "Creatures of the Hoarfrost", perhaps the most glorious track on the album with some impish, dynamic guitars that remind me of 90s Emperor and their ilk.

Incendiary or brutal are not terms I would use to define Lore Unfolds, nor are the riffs and moods necessarily all that diabolic for this field. However, Zofos feels lighter than air, soothing and contemplative despite the accessibility of its riffing matrix. Plenty of variation, and even the longer tracks avoid the sodden monotony so common to the lengthier excursions into the storm. It's quite a surprising record, really, coming after several Wolfnacht disappointments, and a viable gem of the Hellenic underground. So far there's been no sign of a successor to the album, but if it's not to be, I can only hope Athalwolf transfers some of the aesthetics and qualities over to the future throughput of his primary outlet.