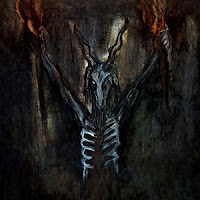 With a million and one black metal bands already performing in the traditional Norse schematic, it takes a particular level of added, grisly character to stand forth and be counted among the crowd. This is a feat Saligia manages with ease, thanks to the decrepit technique used by vocalist 'Ghastly', who has an uncouth, shaky depth to his groans and howls that is comparable to but a few of his precursors. Think of a hybrid of Attila Csihar and a touch of Varg Vikernes (in the occasional high pitched scream), and you'll be in the appropriate ballpark. But Sïc Transit Glöria Mundï reinforces this horrific personality with an array of solid, menacing riffs, regardless of just how familiar and traditional they seem.

A few of these tracks were released as a demo of the same title last year, but they return with a rich, hostile and cavernous atmosphere driven largely by the broad guitar tone and steady, natural feel of the drums (provided by Malach Andonai of fellow Norwegians Dodsengel). The vocals are absorbing throughout, and each song takes it upon itself to incorporate at least one simple, subtle guitar riff to die for. In "Sar Ha-Olam", for example, the curiously warm and descending melody just before the 1:30 mark. In "Womb Caverns", the deep, fibrous bridge rhythm at around 4:30. In "Shed Old Skin", the searing higher melodic chords that carve into the verses. Despite the presence of some pedantic, samey blast beats that often inaugurate the individual cuts, each chokes up a froth of darkness and momentum that quickly becomes a pleasure to experience repeatedly.

Despite the fact that it's crude aesthetics are the diametric opposite of what most of the old guard are creating today through their second or third decades of progression, Sïc Transit Glöria Mundï is one of the better Norwegian black metal albums I've experienced of late, a solid and thuggish hammering which casts the flesh of its listener into the inevitable Pit of damnation. A good, solid tone goes such a long way towards transforming its primitive landscape into a work of emotional bruises and wrenching inspiration, and Saligia is really all the proof we need that the underlying principles of the genre can still be applied with a fresh coat of blood and viscera. It's not over until it's over, and apparently for Norway's sinister underbelly, that time has not yet arrived. Enjoy, and please kill yourself when it's over.