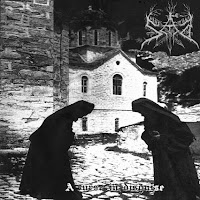 Sad had released a fairly average debut (Total Nothingness) with perhaps the hints of a few good riffs that were dragged down by the listless and ultimately uninspiring architecture of the overall tracks. With A Curse in Disguise, they successfully improve themselves with a richer production standard and an increase in the sheer intensity of the material; a noticeable escalation of potency from its predecessor. But I think by this point it's pretty plain to see that 'Sad' is no so much a depressive black metal outfit as their name implies. At least, not in terms of the emotions that their compositions create. They tend to approach their end times with a more forceful and glorious barrage of thick and soaring guitars that feel more like a mash up of Bathory's glory days (Blood Fire Death, Hammerheart) and other Swedish bands on the melodic side, with perhaps a dash of late 90s Immortal.

These guitars, of course, carry forward the band's original intentions of given the the listener something brighter and balanced to experience than just staring at a gray wall of decay (a trait all too often in the European underground). They're the loudest in the mix here, cruising along in meandering mid-paced swagger ("Chaos Returns", "Forgotten Existence") or a blasted clamor ("Beyond the Great Suffering"). Oftentimes, though, Sad just rocks the fuck out with huge chords reminiscent of Hellhammer, Darkthrone or the later Satyricon records ("True Evil Lies in the Hearts of the Children"), and in all three cases, A Curse in Disguise is a pretty damn good time. I can't promise you that the individual riffs are unique, complex or intricate, but once they break out something like the wall of chords at around :40 in "Alone I Walk the Dark Paths", you know the Greeks can at least write worth a damn, and that this is everything the debut had aspired towards.

Also should mention the vocals, which are far less dry and monotonous here, with a dark and dreary bark to them reminiscent of some of Quorthon's lower groaning, or Abbath on the more recent Immortal albums. They've got just enough character to them to bite into the voluminous swells of guitar, as if they're chopping away steadily at some hardened oak in the middle of a winter wood. Without them, A Curse in Disguise would feel a lot less 'dark', as the actual construction of the riffs are about half-glorious and half-solemn. At any rate, while Sad continues to elude some of the originality that their countrymen once spawned, and the largely suicidal (and weak) lyrics don't match up that well with the actual music, they do that mid-paced Swedish and Norwegian style proud, and this is easily one of the their best records to date, if not THE best.