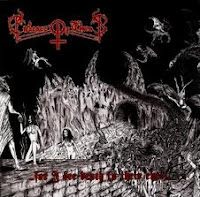 They might spend more of their time along the latter aesthetic of the black/death metal axis, but Embrace of Thorns presented a clear quandary in Hellenic extremity due to their grimy, incessant barrage of diabolic, muddied guitar tones and brutal death grunts. Perhaps the nearest and best comparison would be to Canada's Blasphemy, only I found the Greeks' riffs far more of a central focus, and a mite bit stronger than that particular influence. But what really hurls the debut ...For I See Death in Their Eyes... out of easy reach for the band's 21st century peerage is the sheer, tangible ghastliness of the vocalist, 'Archfiend DevilPig' (I'm not kidding), whose guttural clamor is stretched to an abysmal awning as he raises his bloodcurdling tone to a blacker rasp, and back again.

This is one ominous fucking debut, sounding almost entirely as if it were created in some cavern or starless space where the very horrors and terrors that inspired it are constantly reflected back upon the musicians. Nowadays, primordial 90s death metal worship is all the rage with the younger sect of musicians entering the field, and so Autopsy and Incantation sound-a-likes are the flavor of the times. However, Embrace of Thorns feels slightly ahead of that curve, and the velocity at which they perform much of the material seems to represent the 'blacker' element. They do lurch into these staggering, solemn grooves which hinge upon pure doom/death, but the majority of the cuts blast along in a hurry to the limits of the flesh, lower-pitched tremolo riffing cast into a butter churn while the Archfiend opens up the spans of Hell to his agonized, woeful tidings of hellish sacrilege.

...For I See Death in Their Eyes... is admittedly not the most versatile recording, and a lot of the tinny, tiny blast beats feel all the more samey and familiar after a handful of tracks. However, as the album is only about 31 minutes in length, the listener is hardly going to become bored to the point he/she will want to turn it off. Most of the songs teeter around the 2-3 minute length, with a few creepy intros spotted about, and they're fulfilling enough if you can brook a mixture of drawn out, deathly drawns above its rapid, pummeling substrate. The band is quite similar in execution to the Australian group Cemetery Urn or maybe the Texans Blaspherian, so those into one will probably enjoy the other, and in general, those enamored of the whole Nuclear War Now! and Hell's Headbangers stables should also find much to admire.