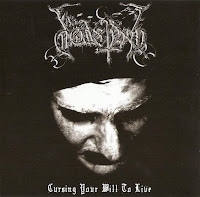 Hot on the heels of Fucking Your Creation, Dodsferd would commit a further 2007 atrocity called Cursing Your Will to Live. Yeah, the guy's got a pretty negative and nihilistic attitude towards anyone reading his album title, but then, this is black metal, so the modus operandi should be a shock to no one reading it. To Wrath's credit, though, when he puts out a pair of albums in a single year (which he will do again), he at least offers something different. Aesthetically, Cursing Your Will to Live is a more barbaric, aggressive assault than Fucking Your Creation, which at its most intense was about as heavy as one of the flimsier riffs here, and ultimately I must admit that I rather enjoy this brutal facade more than either of its predecessors.

A few of the song titles are also lengthened here to the point of hilarity, almost like a parallel, grim mirror to the naming conventions a lot of indie rock, emo and metalcore bands used to use near the dawn of the 21st century. I mean: "You Called it Resurrection, I Call it a Fairytale for Human Parasites, Your Kind!", "Failure Was Described as Religion, as Heresy" read more like lyrics than titles, but to be honest they create a more unique aesthetic than the prior albums. The use of session musicians here makes the album that much stronger, and alive, or at least offering more veins to cut and arteries to pump plasma onto its canvas of distinct negativity. Songs like "Hypocritic Shitfuckers Still Breathing" and the title track are unerring assaults on the listener, loaded with blasting propulsion and angry guitar patterns that, while predictable, do the devil's business with pride, further securing Dodsferd's position on the spectrum of escalating competence and honoring the band's clear Norwegian influences (and Bathory).

Now, I admit that some of the songs here still suffer from the menstrual bloat inherent on the longer tracks of Fucking Your Creation. This album is, after all, 67 minutes long, because many of the compositions are 8, 9, or close to ten minutes...and few of them deserve to be. Such open and crushing black hostility can be accomplished with far less time to the satisfaction of the audience, and I got the feeling several times that a song should have ended HERE, or THERE, and it just kept on battering away. To combat this unwelcome engrossment, though, Dodsferd ensures that the tracks contain some degree of variation. "Under a Broken Cross, I Buried Your World", for example, is an eerie dark ambient piece with all sorts of ghastly vocal abominations, samples and weird, looping tones. "I Kept Standing With Disgust" is just under 3 minutes of admirable, hyperactive aggression which I wish had reflected more of the record's content. And though it's a bit fattened, at almost 10 minutes, "Standing at the Ashes of a Forsaken Kingdom" is perhaps the most sinister track on the album, with its glinting and evil dissonant feeds of streaming knives cast in perfect union to Wrath's howling and rasping.

Ultimately, this is the first decent Dodsferd outing, with Wrath finally coming into his own as a songwriter who can bring the pain to a degree comparable with his influences. Where the prior albums had difficulty coming across as appreciably 'evil' or volatile, this one is pretty much pure hatred that would force even his most jaded detractors into begrudged smirks of respect. A certain level of cellulose still needs to be sliced from the bottom of a half-dozen tracks here, and you can definitely feel a chunk or two of pestilent 'filler' in between the better bits, but for the most part, it's easy to sink those sharpened molars into the album's ribs and sup upon its succulent spite.