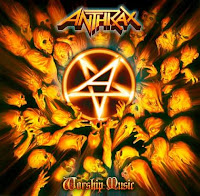 Much like the rest of the 'Big Four' (whether you subscribe to that idiom or not), Anthrax took quite a beating throughout the 90s, mutating their thrash sound to remain current with the perceived modernization of 'cool'. In other words, bigger and friendly rock radio chorus parts, traces of nu-metal replacing a lot of the band's meaty NY riffing, and a lot more 'diversification'. I'm going to level with you: I loathed John Bush as a replacement for Joey Belladonna to begin with, and Dan Nelson even more so. Not because John Bush is bad, mind you, but his deeper, smokey style was (and remains) such a far better fit to Armored Saint. Outside of "Only" and a small handful of other tracks, his tenure with the band was admittedly terrible.

When they finally got their shit together and brought Belladonna back into the lineup, I admit to being excited, but also skeptical of what would manifest on the studio side. The drama was over, at last. It's almost like the two camps were halves of a sandwich: slap them together and they make for a delightful meal, but separate them and your tummy remains unfulfilled. So I had hoped that this next lunch would return the New Yorkers to the level of writing that made records like Among the Living and Persistence of Time such fun standouts in the Golden Age of the genre. And then I heard some of the 'Big Four' live performances...and Belladonna sounded atrocious on much of the material. So, yes, I feared greatly for Worship Music, not only because of the awful (and not even remotely as profound as the band likely thinks) album title and pretty bland looking song titles and lyrics, but because I was worried about the vocals falling apart.

I'm very happy to report, then, that Joey is actually in quite good form here. He sounds almost as if he never left Anthrax, and what's more, the band's continued application of the big rock chorus allows him to stretch his chords even further (for better or worse). Worship Music is pretty much 65% Persistence of Time-era Anthrax, 25% modernized groove metal, and 10% safe to bring home to momma hard rock; and even though this is probably not the ideal revenge or 'comeback' effort, I admit that it's about the best I could have hoped for. The album is about 56 minutes of material (more songs than initially speculated), and although the last 11 minutes should have been snipped entirely, namely the shitty groove-rock song "The Constant", and the wholly underwhelming "Revolution Screams", it's quite consistently entertaining throughout, even with the baggage of the 90s and earlier 21st century in tow.

The strong points: Belladonna's vocals, which I mentioned, and the solid, pumping bass guitar performance by Frank Bello. Scott Ian and Rob Caggiano are also on fire here, but more for the taut and meaty tone and percussive riffing than for stepping up past their prior output. Tunes like "Earth on Hell" and the singles "The Devil You Know" and "Fight 'Em Til You Can't" were wisely placed at the fore of the album; and though I don't quite care for "Devil", which sounds like "Caught in a Mosh" made for prime time radio airplay; the other two are quite exciting with their balance of pulverizing muted speed and Belladonna's highly melodic arsenal. Others that stand out are "The Giant", despite the slightly corny lyrical scheme, and the bluesy, burning swagger of "Judas Priest", despite the oddity of its title and the far too serious seeming lyrics (for Anthrax, at least). In general, though, the first 40 minutes of the record are pretty much what we might have wanted (and deserved) as a follow up to Persistence of Time. If this had been dropped in, say, 1995 or 96, I think a lot of faith would have been restored.

So, yet another decent comeback from one of the 'contenders' in the US scene. Three for Four isn't bad (I enjoyed Death Magnetic and Endgame but am still waiting for a post-Seasons Slayer record with more than 1-2 good tracks on it). With its modern, bolstered production and largely even balance of melody and aggression, it's quite possible that Worship Music will place the old timers back in the graces of many who have turned their backs and lost interest. Mind you, anyone who completely hates the notion of Anthrax writing choruses in the vein of popular hard rock or punk is probably going to find a chunk of the album irritating. They haven't just written a retro 'return to form' record here. But there's enough of that authentic Anthrax to break out the tight jeans, hi-tops and that 'Not Man' tee you've been embarrassed about for the past 21 years.