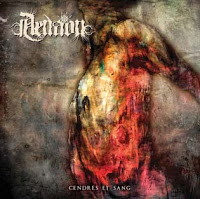 Cendres et Sang is an album that baits you with its initial esoteric nature and then peters out into something all too bland and typical of its genre. The "Kafkaeque" is this great, jazzy horn intro morphing straight into the added acoustics, rumbling bass and percussion of the ensuing "Suncord", but then suddenly the band becomes a mix of melodic black and death metal with some clean and rasped vocals but really not all that much by way of the hinted experimentation. They do specialize in a pretty wide array of dynamics when choosing their tempos, but the overbearing drawl of the vocalist and the chunky thrashing discord beneath several of the compositions left me with the impression of a sort of melodic black/metalcore band...

...and then, just like that, a jazzy jamming calm arrives at the bridge to this song, and erupts into the best part of the track, a wall of chords with a more despotic, cutting vocal passage which combine for some desperately needed grandeur. It's about here that I got the impression that Aenaon's full-length debut was going to be a frustrating one, a landscape of peaks and valleys. And it turns out this is the case. Cendres et Sang is all over the place, often progressive and pedantic, and often ceding into uninteresting metallic rhythms that betray all of its potential. "Psychonautic Odyssey", for example, is a mix of potent punchy thrash and nice leads, but I really didn't care for the vocals. "Grand Narcotic Harvest" and "Once Finite" are robust, double bass driven mid-paced melodic black metal pieces with a few, brighter moments of deviation, and this aesthetic continues deeper on into the track list with "Necroscope", "Kraanerg", etc.

Don't mistake that I somehow hated this, because what Aenaon are doing does maintain some of the intrigue that you'd expect from a progressive black metal act. "Black Nerve" has some cool, bristling spikes of melody and acoustic calms amongst its bloated, 8+ minute bulk. "In Heaven" transforms from tranquil piano to a blaze of black aggression. But then I go and listen back to the intro to the whole album, and I wonder just how amazing it might have been for such a jazzy thread to persist throughout. It really doesn't, and Cendres et Sang feels like an experiment that was afraid of becoming too experimental, a net cast wide at the start of the fishing trip and then quickly retracted for fear of drawing in sharks. Clearly it's in this band's blood to try something wacky, so I say: go and do it. Don't hold back. Because for its straighter melodic black metal element, this album is really not so special.