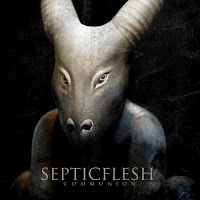 The 21st century Septic Flesh, which takes its sweet time plotting and refining its Gothic death metal legacy into blazing, unforgettable hymns of eloquent brutality and extravagance, has continued to scale in quality which each consecutive release. Sumerian Daemons went beyond a just recompense for the seasoned Greeks' sole stumbling block (Revolution DNA), and through Communion, they've honed and polished their modus operandi to new, streamlined heights with even better balanced and catchier songwriting than nearly any of their back catalog, and the one exception, Ophidian Wheel, simply can't match the stunning production values here; rich and fulfilling, dark and exotic, an impeccable median between modernism and antiquity.

Communion is, at its core, a celebration of all of the band's previous iterations, a hybrid of Goth and death and doom, with an undercurrent of weighted grooves and searing, longing melodies that even succeeds in one-upping Revolution DNA at its own game. The architecture is truly extraordinary, with each track providing both refreshing thrills and memorable compositions that the listener will be constantly rewarded with. The orchestration is perfectly laid out behind the central chug and churn so as to rob it of ever succumbing to ennui, and the guttural vocals and choirs incessantly struggle with one another as if a grudge match of the seraphic and unholy, with that same Far Eastern melodic mysticism bands like Therion and Celtic Frost once tapped into during their primes. Some might balk at the Greeks' constant use of chugging, prevalent low end guitars here, but I can assure you that they are all means to a glorious, mighty end that excuses their cultural primacy.

Fuck, even the COVER of this album won't let you forget it. A paean of old. A patient, pagan beast. Staring.

The hooks are immediate here, with "Lovecraft's Death" ensnaring the listener with its tide of male and female choirs, layered bark and rasp, incendiary melodic glaze, double bass barrage, and the roiling, thickness of its muted substrate. The horns cut straight through, conjuring images of the fell empires, mad Arabs and arcane abominations implicit in the titular author. But then, just as quickly, Septic Flesh have changed up the formula with their tribute to Egypt's jackal faced death deity, "Anubis", which opens with dreary, memorable clean guitars before the sailing, desert melodies ensues. The title track receives merit for its chaotic surge into one of the more belligerent, ominous bridges on the album, just after the minute mark, in which Fotis Benardo beats the living fuck out of his kit while cautionary orchestration bleats out in the background and Spiros' vocals grumble like an earthquake. A few further tracks mirror this formula ("We the Gods", "Babel's Gate"), but there is further deviation as the band crank out a couple cuts in the mold of A Fallen Temple, Gothic tinged death/doom elegies like "Sunlight Moonlight" and "Narcissus".

Hell, they even one-up Revolution DNA with a similar creation called "Sangreal" which sows the same, accessible seeds of sharper, clean vocals over driving rock chords, but then manages to tilt back the scale with its brutal bridge. The one area in which I didn't find myself completely drawn in to the album was the lyrics, which often feel a bit cliche and simplistic. For example, their tribute to H.P. Lovecraft plays like a potpourri of fanboy references rather than allusion of truly obscure horror which the man deserves. Only the final lines 'you stared at the abyss/you'll never rest in peace' feel even remotely poignant. "We the Gods", "Anubis" and "Sunlight/Moonlight" also feel rather half-assed. It's not that I can't appreciate the simplicity of the images, but I too often felt that the music itself was more poetic than the words. However, as I've been reminded many times by fellow metal fans that they pay attention to lyrics about as often as delinquent medical bills, I suppose this is not the most capacious of gripes. And in every other category, Communion is one of this band's highlights, a sensor staring into both the future and the past.