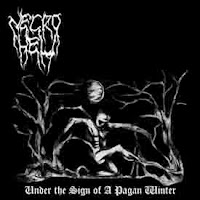 Gee. Necrohell. Under the Sign of a Pagan Winter. I wonder what this might sound like. I'm going to go with the safe assumption of the earliest instance of Darkthrone converting to black metal (A Blaze in the Northern Sky), with some Burzum, Bathory and Mayhem. And would you know it? That is precisely what this Greek band's debut sounds like, although Ungod clearly knows what he's about here, having also some experience with countrymen in Sad, Slaughtered Priest, and Nargothrond, among others. That's not to snub off Necrohell as completely unworthy, because it does it's influences proud despite the high levels of derivation, but I can think of almost no case in which a prospective listener is going to reach for this above its precursors, unless that person is hard up for a truly similar sound.

Production-wise, this is more along the lines of De Mysteriis Dom Sathanas than any of the Darkthrone stuff, if only for the thick, ominous and streaming guitars coursing through its black belly. Where the comparisons to the latter come in is in the crashing, mid-paced material that the band uses for some of the riffing in "Occult Possession" and "Lucifer's Dominion", which is rocking yet effectively desolate. But these are outnumbered on the album by rather constant, faster paced tracks with layered, dire melodic textures to them that conjure up unquestionable levels of darkness, just not enough that the listener is ever emotionally scarred. A song like "Kingdom of Sonoma" sets itself up beautifully with its opening overture of ice-tinged guitar chords, but then sinks into predictable rhythms and familiar structures. Some of the tracks, though, like "Satanic Conspiracy" simply have nothing interesting about them, even if they are competent enough executions in the form.

The vocalist, Sorg has a pretty voluminous, if unoriginal tone which soars efficiently over the music, and the mix of the instruments is extremely tight. Aesthetically, though, Under the Sign of a Pagan Winter feels too much like another also-ran of the 21st century Greek scene, which seems to value Norway-worship above the foundation laid out by Greek bands like Varathron or Rotting Christ. Does the world really need another Under a Funeral Moon? Under the Sign of the Black Mark? Under Ein Bloodraud Maane? Necrohell seems to believe so, and thus they never really to climb out of such secure company and easy categorization. Under the Sign of a Pagan Winter certainly sounds a little more audibly balanced than its predecessors, which comes with the natural chronology of studio advancements, but creatively it splashes around in the slush-filled footprints of its influences without ever out-riffing them, another baseline black metal experience content with sloppy seconds...or thirds, or really, like thirteenths.