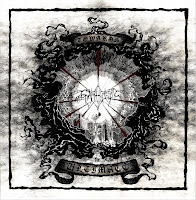 Two years after their debut Misanthropic Path of Madness, the Norse terrorists Svarttjern for an album that follows along a similar ley-line of melodic, blasted aggression. It's almost impossible not to compare their sound to acts like Marduk or Dark Funeral, because it covers such a similar spectrum of emotions, an infernal engine that finds fuel in both eloquence and suffering, heavily supported by the muscular drumming of Grimdun and the crisp, bleeding notation of the guitarists (HaaN and Fjellnord). The downside here is that the sophomore takes a few tracks to really get under the skin, because the riffs chosen on a number of the front-loaded tracks are not all that exciting apart from their sheer speed and precision.

Basically, "Breathing Soil" is a rush of blinding acceleration over a pretty average, if constant substrate of meandering melodies that wouldn't be out of place for Dissection or Lord Belial, but despite a few warlike breakdowns, it's lacking that extra 'oomph'. "Hellig Jord" fares better, with an evil, ascending pattern of chords over the driving double-bass, but it too devolves into something manic but somewhat typical of the bigger budget Scandinavian bands in the field. That said, this might also be viewed as a strength: those who miss the earlier, scathing years of, say 1349 will LOVE a track like "Aroused Self-Extinction" or "Desolate Predictions", because these gentlemen...err fiends have all of the same chops and proficiencies, and craft each riff with admirable caution and skill. But my favorites here actually came at the close of the album, with the snaking, dissonant and vicious wall of force that is "Through Madness and Sanity I AM" (what a title), the choppy bridge of "Unmasked Violation of Life" and the rocking mesh of anger and fragility that is "For What Blooms Without Lust".

When compared to its elder sibling, Towards the Ultimate comes out on top due to the higher fraction of memorable riffs conjured through its hostile depths. The production here is even tighter and more professional than before, and the vocals grim and bloodied even if they're not the most unique aspect of the performance. Svarttjern's biggest weakness is probably that they tread along heavily trampled ground, and don't really offer a novel incentive why one might choose them over the classics in the field (Opus Nocturne, In the Nightside Eclipse, Vobiscum Satanas, etc). But the strength of their performance, their ability to marry muscle to intricacy, the glorious to the grotesque, is unflinching, and you won't hear many newer bands with this level of well-rounded, punishing ability.