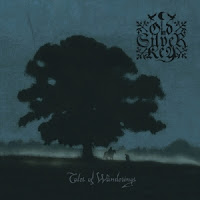 On paper, a collaboration between the membership of the Ukraine's Drukdh and prolific French artisan Neige (he of Alcest, Lantlôs and numerous other projects) seems a natural fit. Both specialize in nature worship, depression, and drifting compositions with a lot of wall of sound guitar styling and subtle twists of melody. The two also share a cross-section of admirers, carving a large chunk out of that swath of solemn and modern shoegazing populace who have turned their sights upon the permutations of the black metal genre into the terrain of post-rock, indie rock, or what have you. Well, the time has arrive, and Old Silver Key is that very collaboration; Tales of Wanderings the anticipated debut through Season of Mist.

Let me preface the rest of this review by stating that Tales of Wanderings is not by any stretch of the imagination a metal album. So those expecting a black metal coupling of the two parties had best be prepared for something exponentially lighter on the ears and spirit. There might be a few tremolo picked passages here or there redolent of the genre, akin to Enslaved's excellent Vertebrae or perhaps the German band Island, but these are marginal at best. Old Silver Key is instead another chance for Neige to flex his 'soft side', far softer even than Alcest, while it simultaneously allows Roman, Thurios and crew to delve even further along the course they had started with some of their recent fare (Microcosmos, Handful of Stars). Unfortunately, while it does have a few moments of appreciable bliss and escape, some tranquil sparks of variation that allow the listener to feel he or she is walking on air, Tales of Wanderings falls well short of either of its progenitor's mainstays in terms of quality.

In fact, this is for the most part a lame and tired pastiche of indie/emo rock cliches without the strong songwriting to support it. Granted, I'm not an Alcest fan to begin with, but I've enjoyed a number of Drudkh's past releases (Blood In Our Wells in particular), and I'm a bit disappointed to see their ideas wearing thin. Yet as jaded, pedestrian and unmemorable as most of the music on this album seems, it is the vocals which drive it over the edge towards irritation. Neige has never impressed me in this field, at least not with his clean tones, but with Tales of Wanderings he has completed his transformation into any-random-hip-kid-singing-the-adolescent-blues-at-any-random-coffee-shop-anywhere, only with English as a secondary language. His performances on tracks like "November Nights Insomnia" is naught more than dreadful, wall-gazing tripe, with no real range to it, no captivating melody, and it does the reasonably well produced music no service whatsoever.

There are particular points at which he shifts to his more graceful, higher pitch (as in "Burnt Letters"), reminiscent of Alcest's 'climactic' build-ups, but these are only superior in so much that his voice drifts off into the background, overtaken by the melodic drift of chords. How this man has developed such a following with such a wimpy, deadbeat intonation is beyond my ability to comprehend, but the fact is that Tales of Wanderings would have worked out better as an instrumental record, with another singer, or with Neige snarling the entire time to provide a strange contrast with the light-headed music. If you think this guy is a great singer, then I've got an open-air banana grove in Antarctica to sell you. Mind you, this does not excuse the music itself, much of which is derivative shoegaze rock 101 in nature, with slightly distorted streams of chords playing against soft mute streams that themselves occasionally break into chords in predictable Gothic rock fashion, but without Neige, even this might have functioned as passable elevator music.

I didn't loathe the album entirely. I'll give some credit for the snowflake-like bass lines that dust the guitars in "About Which an Old House Dreams". As limp wristed as some of the songs come off, Old Silver Key manages to somehow elude the burden of utter stagnation and monotony through their willingness to mess with tempos. Hell, "Cold Spring" even has an arguable blast beat running through its depths. Where the pianos and ambient sequences appear, they provide a flawless integration, a natural balance. The production, too, is bright and fitting. It really let's the listener feel the expanse of each guitar pattern, but then, this is pretty much the standard for a form of rock whose spiritual ancestors include Toad the Wet Sprocket, Gin Blossoms and other 90s alt radio. But at least with those bands, you had singers who were striving for those huge #1 hit single chorus parts. With Old Silver Key, it just seems like an afterthought. 'Hey, we've written some pretty chill music, let's phone in some mellow vocals and show everyone the hearts on our sleeves'. And I'm afraid, at least this time out, that this particular handful of stars have not aligned properly.