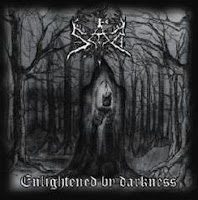 After a sharp spike in quality from the debut Total Nothingness to 2007's Curse in Disguise, Sad were en route to becoming on the stronger stock black metal outfits in Greece. This momentum was drawn to a halt with Enlightened by Darkness, the band's third full-length, which seems like a step back from its predecessor, but let me qualify that statement by saying that little has changed in terms of the musical content. Once again, one should not be misled by the band's moniker: this is hardly the 'depressive' sort of material you might be expecting, but instead a driving, melodic beast with fully Scandinavian influences from Burzum, Mayhem and their like, and a strong guitar tone that dominates the recording.

As with the prior albums, these guitars clutch the steering wheel and never let them go. Sad is foremost a band about the riffs, and it feels like the rasped drawl and an admittedly competent drum performance seem to remain in the back seat. For that reason, there's just not a lot of interesting layering within the songs. They depend wholly on how damn catchy the guitars are, and though some thought was placed in the construction of notes, a lot of songs grow tired in short order. Particularly, these are the longer pieces like "Sweet Loss" or "Ignored", which move with a melodic swagger somewhere between Mayhem and Bathory but simply cannot seem to justify 7 and a half or 8 minutes of constancy. The same goes for "Let Snow Cover the Earth", which opens with a fairly dull blast sequence and then spit its one brighter, emotional riff before exhausting all the surprises in store.

Better are the shorter pieces, like "Soul Scars", which opens with another of these thick, streaming elegies and then manages to belt out a cruel rock groove in the bridge redolent of a Hellhammer or Darkthrone. Or "Destroy Them", which is straight cruising mid-paced black metal following a similar, mean sounding course with brief fits of acceleration. It almost seems like the more drifty and dreamy the band grows here, the less potent and memorable they become. It's a shame, really, because these guitars have great production, the drums crash along appropriately and they're clearly solid as cement. Ultimately, Enlightened by Darkness just doesn't leave the same impact on the listener as A Curse in Disguise. Granted, it's still better than the debut, but not by a large margin.