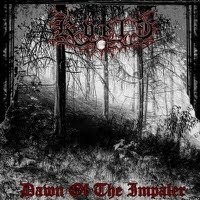 Kvele is yet another project to involve the prolific underground fiend Ungod, who some might recognize from Slaughtered Priest, Sad, Nargothrond and Necrohell among others, and comprises the rhythm section on this 'full-length', Dawn of the Impaler, which actually got a release through a Japanese label (Sabbathid). If you've not heard his bands before, they're typically straight up Scandinavian inspired black metal with a standard but often strong riff set. Some albums are decent, some not so much, and I'm afraid this legacy of averages continues upon this record, which also has Nadir (Sad) on vocals. Hell, since Kvele basically IS Sad; I wonder why they didn't just release this record under that banner, since the styles are quite similar...but there's at least one other guy here.

I described this as a 'full-length' because it's quite short at 24 minutes, with only six tracks. I might not normally care about this brevity if the album were actually entertaining, but instead it's a rather mediocre, rambling sort of black metal which expends most of its best riffs in the very first track ("Slay or Be Slayed)". That's really not saying much, since it's nothing more than an average alternation of black beats and slower, double bass rumbling with notation that will surprise no one. Think Sad, only a little dryer in tone, with guitars that are more 'barbaric' than desperately melodic. Even at the most rocking, though, this is pretty basic composition which didn't feel as if much went into its construction, and the production and velocity don't conceive much of an atmosphere on any of the tracks. "Impaler" itself isn't so shabby, with some varied riffing reminiscent of the last Sad record (Enlightened by Darkness), but if you seek riffs to remember, you've come to the wrong place here...

A pity, because the performances are all around solid. Nadir isn't evoking his best barking rasp on the album, but everything from the drums to the guitars to the syllables falls straight into place, tightly and securely into the not-too-raw cult aesthetic. I only wish that there were more to catch the ear here, perhaps some synthesizers or ambiance or just...something to lighten the load of the samey, familiar guitars. I realize the point behind this is to be as true and cliched as possible, but really, these musicians are capable of a lot more. Hell, throw us a decent melody or two to bite on...or some tangible, menacing dissonance. Kvele plays it too straight, and that will undoubtedly proves its undoing as it disappears into the forgotten annals of the 'also-ran'.