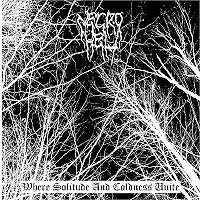 Necrohell's Where Solitude and Coldness Unite 7" sounds about the same way as it sounds: cold and black as fuck. Coming off their debut Under a Sign of a Pagan Winter, one should not have any expectations other than the typical Norse style black metal drubbing he or she has experienced a thousand times before this. But I must admit, that the title track here (and the one original contribution) is appropriately vicious and feral, and the listener gets the impression he or she is being chased through the winter forest by SOMETHING, whether that be the baying pack of hungry wolves or a killer in a ski mask.

The tones are good and rich, the melodies predictable but potent, and the resonant rasping of Sorg is nothing to scoff at. For a song nearing 7 minutes, it also keeps its pitch and pace varied enough to perk the listener's interest. In fact, this one track is better than anything you'll find on the debut, and it's all owed to the experienced riffing of Ungod, who has been rather prolific through the 21st century Hellenic scene with Sad, Nargothrond and Slaughtered Priest. The other track, "38 Millimeter" is a cover of a Greek punk band called Adiexodo, who were around in the early 80s (I'd never heard them before), and Ungod does well to transform this into his usual streaming, black metal style. The opening notes are a bit repetitive, but you can definitely feel the punk undercurrent and how well it actually fits in this new format, with a rather 'warmer' feeling to the chords than the Necrohell original.

Anyhow, while this might not be the most impressive 7" out there, it shows a clear sign of improvement and possibly better things to come if Ungod can find time away from his numerous other projects. If you enjoyed the debut, then you'll probably love this, despite its obviously derivative style. Fans of Mayhem and Darkthrone will find its aesthetics familiar.