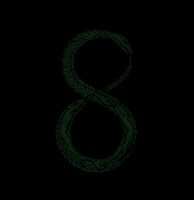 Acrimonious is yet another Greek black metal project to involve members of Stutthof/Acherontas, who seem to have been quite busy in the year 2009 (Acherontass' side project Nihasa, and Stutthoff digging up some old tracks to release as an EP). This is a distinctly more straightforward take on the genre than their mainstay Acherontas, in that there are far less synthesizers and atmospherics involved, but like a lot of the work they've done in the past, there just never seem to be those truly unhallowed riffs or glimpses of genuine malice tearing through the fabric of composition. That's not to say that Purulence is a bad debut, because its production values are solid and there is some variation in the track list, but ultimately it ends up just another, unsung ripple in the broad, Norwegian wake.

Firstly, I'm not sure about the decision to have an 11+ minute track, "Call to Disorder", right up front. The song sounds enormous, with doom-like black riffing and tiny trails of discord through the majority of its playtime, but spurts of accelerated blasting to breach the monotony. Yet the guitars, as rich and up front as they sound, never mold themselves into anything interesting. Thankfully, none of the other tracks feel so bloated. "Dissolving Spirits" and "Angel Withdrawn" are faster, with flights of tremolo picking or rushes of low-end chords that channel the charnel influences of Bathory, Mayhem, Emperor and so forth. Several of the other, slower pieces like "Purulence" and "At the Portals of Daat'" are better at managing their individual atmospheres, the latter involving some of the best, dire melodic breaks on the entire album. "Spirit's Eclipse" is probably the best overall, with the warped guitars in the intro and a subtle, shining escalation to the streaming guitars, but even this is just not exemplary.

The lyrics here were rather interesting, if a bit jumbled. Loads of blasphemous, thoughtful imagery are rushed before the readers' eyes with far more complexity and curiosity than the music really permits, and it's just a shame that such effort wasn't placed in the actual notation. The vocals are flat out dull throughout, a typical grunt and rasp that never achieves any sense of syllabic integrity or menace, an open throat almost phoning in the stirring imagery. Often I was reminded throughout of several of the Swedish 'orthodox' black metal bands like Ondskapt, but mostly just in mood and the obvious attempt here to be simple and eerie. I was taken here by the Greeks' poetic insight and Purulence's tactful production, but the actual musical does not dwell upon the conscious for long, and I must reiterate that Acherontas seems to be the best decision these two have made in their careers; most of these parallel projects don't live up.