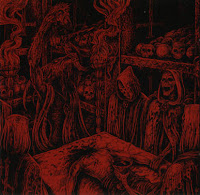 Atonement Ritual is build from the same basic stock as Embrace of Thorns' debut ...For I See Death In Their Eyes... A convocation of primal, evil old school death metal with roots in everything from Incantation, Bolt Thrower, Pestilence, Asphyx, Autopsy and Blasphemy, that last in the straight blasting that often dominates the rhythmic manifesto. This is absolutely the sort of album that will hold appeal to those unwashed, amassing legions who in the past few years have placed the worship back on the 90s forefathers of the genre as opposed to the technical showmanship of modern death. But despite it's large and cavernous trappings, Atonement Ritual is also appreciably varied, with a ton of fast passages and ambient cutaways that make the album feel that much more wide and fulfilling.

As the superb cover image aesthetically implies, this is the stuff of nightmare, pain, blood and suffering with absolutely no hope for redemption, no light at the end of its oppressive bedlam womb. From fore to aft, this is 34.5 minutes of fucking darkness, and about half way through you'll feel your stomach start to quake from the horrors. But the band won't release you that easily, and songs like the death/doom driven "Venom in Veins" or the thick, blasted perversion of the "Ceremonial Rites of Fornication" will easily hold the attention of anyone seeking out such primordial, blasphemous indulgences. The vocals are again a median between Karl Willetts and Martin van Drunen, ghastly and fulfilling, often layered in their torment. The ambient pieces are almost all appropriately terrifying, from the spacey "Litanies of Inversion" to the ritualistic "Impure Orgasm" to the alien-like brooding of the "Altars of Malefic Triumph" outro. These Greeks have conspired here to feast upon the thin sanity of their audience, and to that extent, Atonement Ritual is a triumph.

That's not to say it's perfect...a lot of the riffs wind along predictable courses, and the blast bits can occasionally feel just as monotonous as they would be elsewhere unchecked, but as some cohesive chasm to the domain of the damned, or an underworld overgrown with undeath, you'll not want to excuse yourself for one stinking minute. Atonement Ritual was slightly ahead of the recent tide or retro morbidity, so if you're into other old school proponents like Cemetary Urn, Truppensturm, or Blaspherian, then this is one act of disturbance of which you will surely wish to partake, even if it's not the best of its class. Embrace its thorns, and embrace the horns of its master, and you'll never feel the same way when the lights go out again...