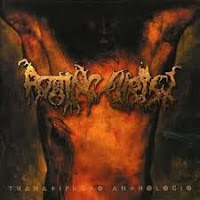 It was bound to happen that a band of Rotting Christ's stature would attract one of these pocket mop-up compilations, it's only a surprise just how long it took for Century Media to do so. But hey, a 20th anniversary makes sense for a hallmark on which to issue a career retrospective, right? Well, frankly, I don't see how this makes Thanatiphoro Anthologio any more of a value than some other, shit stained, greedy wallet molester. Because that is all we have here. Two discs or 24 previously released tracks that span the Greeks' entire career, from their demo days to their latest album, which had come out early in the same year, but several tracks of which were worthlessly included anyway...

Now, there are many ways in which this could have been done RIGHT. Since the label and band saw fit to include the demo tracks here (the only ones likely worth a damn to the Rotting Christ fans who already own the albums, and would be the only people buying this). This band had at least a half-dozen to a dozen rare demos, splits, and EPs back in their formative years, for which the permission might have been acquired so that they be reprinted in full here. It could have been a bastion of rarities serving to complete the fan's collection of this, one of their most beloved bands. Instead, we get about three demo tunes: "The Nereid of Esgalduin", "Fghmenth, Thy Gift" and "The Fourth Knight of Revelations". The last two are taken from the Ade's Winds demo (1992), but "Nereid" would already be available on one of the re-issues of Satanas Tedeum (1989) or the Dawn of the Iconoclast EP. Not to mention that re-recordings of both "The Fourth Knight of Revelations" and "Fghmenth" are available as part of Thy Mighty Contract, and sounding better. In other words...nice try, but no dice.

So with those 'rare' (but readily available) demo cuts aside, what is left on offer? Nothing more than a chronological stroll down memory lane, with an average of 2 or maybe 3 songs taken from each of the studio full-lengths. The choices aren't bad, because when it comes to Rotting Christ, there aren't many bad choices to MAKE, but let's bear in mind that 'fan favorite' implies a song that the fans already have a deep affectation for: meaning they most likely already own it, or have pirated it and are even less likely to purchase this than the albums. No later rarities, no 'b-sides', no unreleased tracks that we'd want to paw ourselves over, just a booklet with some photos and words of praise. Two discs and 110 minutes of redundancy, and an ultimate waste of time with the possible exception of some scrub who'd rather buy a black metal 'greatest hits' than appreciate the constituent recordings in their preferred environs. Now, I love Rotting Christ: they've probably produced somewhere between 25-35% of my favorite Hellenic metal records in history, so trust me when I say that any cent spent on this is a cent you could spend on something worthwhile, or just hold it in your piggy bank for their next studio release.