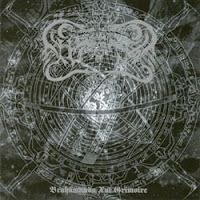 Nihasa is a peripheral project of Acherontass, who most will know as the front man and guitarist for Acherontas (formerly Stutthof). From a style standpoint, it's not much different than that of the new mutation of his mainstay: precipitous environments of longing and death anchored by a fascination for the ancient and occult. This is an album that one must pay pretty close attention to, especially to the guitars which are writhing just below the current of ambient choirs and synthesizer orchestration, if you want to capture its subtleties. In truth, though, there aren't many hidden in there, and it's a fairly stock experience for the genre, even if its beautiful to look at and the overtures to Mayan, Babylonian and Southeast Asian mythology are intriguing.

It's always tricky to begin an album with an extended intro, and "Reflections" is precisely that, an eight minute ritual intro which lots of voluminous choirs, bells and keys and a steady beat beneath to keep it all in check. Unfortunately, aside from a few swerves in notation for the choir, nothing exciting ever really happens outside of its inevitable escalation. "Shibalba" brings forth the hissing undertow of the guitars, and Acherontass' bloodied, carnal rasp, but these are set against a pretty loud swell of further atmosphere that never lets them shine. About midway through the track, Nihasa breaks into a faster pace, but considering that this is an 11:30 song, I would have expected a more climactic occurrence to develop. Instead, this all feels like a largely level playing field with little variation. Better are "Rakhasas" which is another 7 minute ambient drill with distorted guitars ringing forth, and spacious vocals; or "Brahamanda Xul Grimoire", which gives a Filosofem-like feel affixed to soaring choir chaos, but even here the guitar riffs and vocals never assemble into the sort of hypnosis one wants to continuously relive.

In fact, disappointingly, my favorite track on the album is the ambient, martial finale "Nibiru the Winged Sphere", which at least has an appreciable escalation of bombast and shimmering veil of immediacy. And this, too, is just not all that exceptional, but brighter and more dramatic than the majority of the record. Like much of the album, I felt a dimension of Summoning influence, though the music is nowhere near so engrossing and majestic. Or maybe a more symphonic alternative to US bands Leviathan or Xasthur (the latest Nihasa logo even looks astoundingly like a Xasthur ripoff). At any rate, this is no competition for Acherontass's other band Acherontas, and if you want to hear the guy in finer shape, check out Theosis or Tat Tvam Asi (Universal Omniscience). Brahamanda Xul Grimoire is ultimately a dense, dull and harrowing journey into nowhere, with a few fragments of vile black shine.