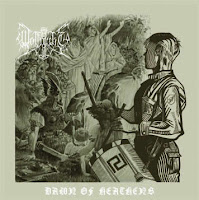 Based upon the strength of his side project Zofos, which also got out an album in 2007, I was hoping Athalwolf would create a turnaround for his mainstay Wolfnacht, which had sort of slacked off on its 2003 effort Töten für W.O.T.A.N. The problem with that album is the same as it is for many of these NSBM-oriented acts, that is they don't seem to want to choose between black metal and straight up RAC rock/punk, so instead of merging them together (plenty of punk black metal hybrids have done well), they just sort of split the tracks to provide a variety. So, where Heidentum was a strong and cohesive debut, its successor felt sort of scatterbrained in spots, even if it wasn't all that bad in the end.

Unfortunately, Dawn of Heathens makes the same mistake as its predecessor, in that it feels like two separate albums being jammed together. A few of the tracks here ("W.O.T.A.N. Returns" and "Totaler Krieg") are pure, meaty punk/rock tracks with thick, overpowering bass lines. The latter feels like a bruising, car cruising anthem while the former has a few traces of vitriol within, yet they come right at the center of the album and totally throw off the rest. After its' martial, sweltering intro ("Kampf-Krieg-Sieg"), there are a pair of tracks ("Wild Hunt" and "Black Bubonic Plague Part II") which return straight to the cold, vicious Scandinavian black metal tones of his debut full-length, complete with melodic, dire streaming guitars and tortured vocals that feel like a louder, more raunchy Varg Vikernes. "Wotansvolk Erwache" is a slower, more measured exercise in grim spite with a good amount of atmosphere to the drowning, drawling chords, and "Winterwald...Mein Reich" has a thicker guitar tone that nearly hides its melodic, meandering lead accompaniment.

The black metal here is honestly pretty good, probably on par with Heidentum, but yet I can't help feeling like the deviations at the album's core take me right out of its passionate, painful and spite-driven embrace. There's nothing necessarily bad about any of the tracks, and I'm yet again impressed by Athalwolf's ability to perform everything himself, but I almost feel like he'd have been better off separating this stuff into a pair of projects, rather than just the one. That said, there's a good cold production to the black metal tracks, and both the intro and the outro (the latter of which samples chanting over an escalation of backing black metal) are pretty sharp, and it's a stronger experience overall than Töten für W.O.T.A.N.

Posted by autothrall at 8:09 PM