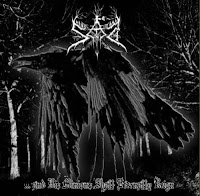 Sometimes the notes configure themselves into penetrating patterns of poignancy, and sometimes they do not. This is both the malady and the cure to Sad's seemingly average string of releases. Where full-lengths like Abandoned and Forgotten and Enlightened by Darkness have not entirely delivered the goods, this brief 11 minute EP, with a mere two tracks, delivers them wholesale. The vocals, the drums and guitar tone are all pretty much the same as on the 2009 full-length, and the style is a dead ringer, but a muse of dire melody has been captured and for the most part, this is strong material.

Of the two songs, it's the opening to "Dichotomy" which immediately captured my attentions, a teeming, uplifting melody that plays out wonderfully against the simpler, steady rhythm guitar as it accelerates into a bristling, majestic blast sequence. "Shallow Grave" has a similar style and pace, but after a few minutes pass, I felt that the riffing became somewhat more level and predictable, though Nadir's wretched snarling helps break up any potential for monotony. I very much enjoy the thick floe of guitars, it's somewhat redolent of the more recent Arckanum records (but not exactly), and a good way to dominate this melancholic but forceful niche of the genre.

Anyway, I'd square these tracks off just about nearly anything from the past two albums and they'd come out ahead, even if they don't reach the bar set by their sophomore A Curse in Disguise (which I'd maintain is their best work). Nothing has really changed, the band are quite settled into their sound and don't seem likely to evolve or devolve anytime soon, so if you've heard anything out of their back catalog, you know exactly what to expect: only marginally more titillating.