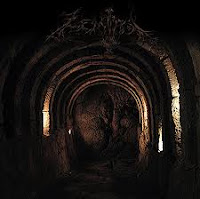 Zemial is a band that has not quite sat still through the sparse schedule of releases they've produced over two decades, each representing a slight shift towards or away from the primal black metal aesthetics that first inspired them. So it's not a big surprise that the I Am the Dark EP sounds little like its predecessor, the majestic In Monumentum full-length, which was as much an epic heavy metal record as anything else. No, the two tracks present here probe back into the annals of time, to drag forth a raw, pumping, black thrash & roll element which seems like a cross-strain of Hellhammer, Bathory, Venom and perhaps even a bit of Mr. Kilminster. Then again, even between this pair of creations, there is a distinct variation...

"I Am the Dark" is pretty much what I described, a straight laced, black rocker with groovy blues rhythms. There's a nice, dark atmosphere here created by the reverb in the growling, carnal vocals, not to mention the thick guitar tone, but ultimately the chorus feels a bit 'common' and predictable like any given NWOBHM or archaic power metal piece. "Words from the Temple of Shadows", on the other hand, is a dirty, blunt speed/thrasher which is saved by its addictive use of samples and effects after the strong lead sequence, and the ensuing barrage of melodic percussion. Otherwise, it too might have suffered from a streak of familiarity that would hardly compel any further listening.

All told, though, it's not a bad mutation. Zemial has always grasped back into the depths of extreme metal's past for their inspiration, and even though this is not so glorious or keyboard laden as In Monumentum or their debut EP Sleeping Under Tartarus, it rocks just enough to maintain the attention span. Too bad that there wasn't just...'more' of it, and thus I Am the Dark becomes another collector piece more than something most will turn to in need of their Greek black fix. But it's nice that Archon Vorskaath cares enough about this band to keep updating it from time to time, even with such a short amount of output.