Nargothrond - Following the Frostpaths of the Hyperborean Landscapes (2007) 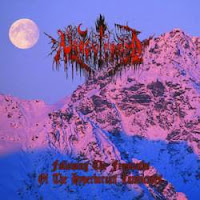 Ugly color palette aside, the Nargothrond debut Following the Frostpaths of the Hyperborean Landscapes is likely to appeal to the solitary, wandering spirit within the core of any desolate black metal fan. On its surface, this is about as unremarkable and unassuming as the genre gets: almost numbing, blasted drums give support to a slew of streaming, desperate melodies perfect for a lone trek across the wasteland of the imagination. Bloody, yawning rasps are barked in sadistic succession across the dense, clotted guitar riffs, and the very notion of dynamic variation could be seen only as a setback. Almost every guitar line is battered out to its predictable end, culling the obvious influences of Darkthrone, Immortal, Bathory and so forth into a paternal, predictable matrix of fanaticism.

But does it have a deeper layer to it? The answer is unfortunately no. Nargothrond wears its hoarse, Norse pride upon its sleeve, and the weight of its impact will rely solely on just how much space the audience has for another band of this type. To their credit, the chords here meted out in fluid might, especially in "Aurora Nocturnis, A Ravenstar Among the Nebular Skies" (uh huh) and its fist pumping momentum; or the Hellhammer/Darkthrone worship inherent to "Through the Forest of Frozen Storms". If you were in for a quick fix of the familiar, then this would not be a bad record to mount on the turntable to get yourself in the mood for tracking bloodied footprints in the snow or draining the mead-horn. The production is loud and bright, and though the bass sort of just blends into the nothingness beneath the guitars, the latter seem strong enough to carry the cranium-banging to the exclusion of the other instruments. As for the vocals, well, there's just not much to them...meaty and bitter but mediocre.

In the end, then, the one thing that distinguishes Following the Frostpaths of the Hyperborean Landscapes from its countless, newsprint-toned neighbors would be the gaudy color scheme. Even from Greece, there have already been a large number of Scandinavian derivatives, so the most I can say for Nargothrond is that they're not at all bad, but not unique enough that I'd track them down for any other reason than desiring a quantity of the same. I dig the Tolkien inspiration of the name, and I dig their earnest simplicity and loyalty to the black metal ethos. I merely wish that a hint of creativity or subtlety might have been flexed here to a greater effect than the burgeoning muscle of the chords alone, which in due time seem rather bland.