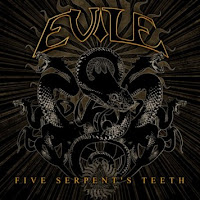 Assuming that this whole flashback thrash scene doesn't fall entirely on its ass in the next few years, Evile are one of the few bands that probably 'have it made'. They've got enormous visibility through their deal with Earache, lots of touring under their belts, and their 2009 sophomore Infected Nations was a clear improvement over its predecessor Enter the Grave (an album I didn't really care for). The tragic loss of bassist Mike Alexander (eerily similar to Metallica, who happen to be their biggest influence) has served only to draw the band together, stronger and forge further along the road of solid hooks, taut musicianship and dynamic flexibility. What I like the most about this British band is that they have outgrown the 'hey guys, look, we're THRASH' that poisoned their debut and most of the younger acts in this field. This is no longer a joke, it's the real deal, and they seem intent on propagating the genre rather than merely mocking it.

That aside, there were many moments on Five Serpent's Teeth in which I felt like the band was flirting a bit too close to its 1984-88 Metallica obsession. Matt Drake's vocals tend to sound a lot like James Hetfield, or at least his percussive strings of syllables, and this is especially true in the title track, "In Dream of Terror", and "Eternal Empire". Now, this is Ride the Lightning and Master of Puppets era primarily, which is not at all a bad influence (hell, these are some of my favorite albums ever), but I'm just not sure Evile has the songwriting chops to really pull it off. Now, I could tell you I heard Xentrix or Defiance in their sound, two more obscure 80s thrash entities (one also from England), but then, that amounts to the same, since both were heavily influenced themselves by Metallica. That's not to say that the band's entire riff palette is 'borrowed' or paraphrased directly from that one band. You'll hear a bit of Megadeth, Slayer or Exodus, but the way Drake's vocals carve out aggressive melodies is almost always in that Hetfield/Billy camp.

So now that we've got that out of the way, that this is essentially Master of Puppets for a new generation, only nowhere near as strong, I've got to admit that I found this album inferior to Infected Nations. There are a few moments of melodic gleam. The intro to the title track, for example, or the galloping scream of the leads in "Descent Into Madness" and "Long Live New Flesh", but the chorus sequences just don't seem to gather up that punch that they need to slide around in the brain for any more than a few moments. You'll find plenty of variation here, from the token ballad "In Memorium" (it's no "Fade to Black") to the more potent chargers like "Long Live New Flesh" or the titular opener, but even the latter fail to really capitalize on the momentum they set forth. The fact that a handful of riffs here feel like clear Easter egg tributes to Master of Puppets staples like "Leper Messiah" and "Battery" doesn't really help matters, it only increases my desire to once again listen to that record, which does it all right.

So are there redeeming factors? The production, for one. The guitars are hefty, punctual and contrast nicely with the band's intense leads, which are yet another forte. The band never drones on repeatedly at the same pace: each composition is crafted with ample versatility so as not to sink the listener's attention span. The lyrics aren't so bad; not exactly conjuring up the most striking and poignant of images, but consistent with stuff like Metallica or Flotsam & Jetsam from the late 80s. Ultimately, Five Serpent's Teeth serves only as a competent shadow of its primary stylistic precursor, never really achieving the ability to surpass the obvious. It's not a negative goal to want to revisit or reinvent such a monolithic sound, but you've really got to deliver, and I'm just not hearing those unforgettable songs that made the Bay Area giants the wealthiest thrashers in the universe. Infected Nations honestly felt like it might break free from the elephant in the room, but this new album feels like a 25 year step back beneath the pachyderm.