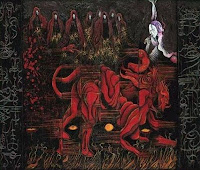 One of the first things that struck me in listening through Serpent Ascending's debut album is just how closely they live up to their name. Seriously, each time I closed my eyes while experiencing the band's old school, evil riffing gestures I was granted a vision of some snaking maneuver up some evil, pagan column of stone or a naked and terrified human sacrifice. The Finns have an ample supply of despotism and diabolical atmosphere without needing to foist any excess reverb or production tricks upon its audience. What you have is pure, unadulterated, raw death metal in its most primal, 90s form, with equal influence from the late 80s scenes of Florida and Sweden, in addition to a hint of Incantation and the Finnish forefathers you'd expect (Convulse, Demigod, and so forth).

Lot of low end, grim aesthetics being conjured up straight through the guitars and the ceaseless hammering of the double bass, and the 'climbing evil' motif is enforced through tracks like "The Human Ladders" or the slower, creeping pair of tunes dubbed "The Mournful Pilgrimage", one of which sets up the album's pacing. The vocals are brute and blunt, and admittedly they can grow monotonous, but for those seeking their fix of Onward to Golgotha, they're not so shabby. What's more, Serpent Ascending glaze their morbid ministrations with these atmospheric, elegant and minimalist lead sequences in the amazingly haunting molasses of "Saturnal", or the more complex and varied closer "Endless Initiations". But let me not mislead you into thinking that the album is all sloth, they have an upbeat side to them which emerges in the more heavily thrashing rhythms of "Serpent Ascending" itself, or "The Enigma Unsettled".

Unfortunately, there is a slight lack of inconsistency here, with some of the cruder tracks like "The Entwinement" bringing up the qualitative rear, even if they themselves have a strong notion of internal atmosphere. I could go on listening to "Saturnal", "The Enigma Unsettled" and "Endless Initiations" repeatedly. They are some of the stronger old school numbers I've heard of this sort in recent years, and should be mentioned alongside bands like Sonne Adam or Father Befouled as an example of how to do this all correctly. But ultimately there are some less savory moments where I felt I was nodding off, and the vocals don't really peak my interest outside of their grisly, broad authenticity for the genre. Still, with the wave of atmospheric retro death metal considering to gain in popularity, the timing could not be more perfect for such a debut effort, and Serpent Ascending are likely to thrill the newcomers to the niche, or provide manny (un)happy returns for the veterans who seek sincerity amidst the grinding miasma.