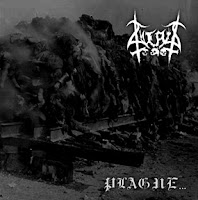 Consisting of two members named War and Wrath (the latter being the same Wrath you might know from Dodsferd), Grab is quite up front about its hostile intentions. If anything, Plague... is an accurate representation of such murderous delights, a filthy and despotic payload of hatred that delivers no respite from its puerile, pestilent propaganda. But despite the writhing, raw evil of the guitars and Wrath's vocals, there are a number of flaws to the album which hold it back from achieving total dominance over its target populace, and although its hard not to appreciate Plague's... grimy purity, it falls well below the standards set by its various influences (Darkthrone, Burzum, Mayhem and so forth).

For one, the machine-gun drumming just isn't working out here. I appreciate the difficulty in getting someone to play at such passionate speeds and consistency, but there's a tinniness to the beats here that sadly does not support the music. With some records, it works damn well, but here, once the warlike orchestral bombast of the intro to "Funeral Feeling" subsides, which feels like the video game score for some futuristic first-person shooter, they simply feel too acidic, like someone rifling about a scrapyard of aluminum fixtures. Also, the riffing patterns only rarely offer more than the minimal amount of effort, with repetitive and predictable sequences of notes that don't exactly draw the ear back into their depths. Don't get me wrong, War keeps the notes versatile and incorporates a fair share of melody into the aural holocaust, and you can hear a bass softly snaking through the proceedings, but of the whole album, I couldn't pick out a single lick that stood to memory.

Wrath is of course a natural here, dripping ichor all over the soot and ash being ground out beneath his diabolic plague poetry, but he too doesn't quite inspire with the meter of his voice. He simply goes to town, snarling like a rabid pack of rodents in the back alley of a steakhouse. The underpolished production of the album is admittedly in season with its style, and I definitely took away feelings of unrest and anxiety, which are essential in the underbelly of black metal, but I would have loved for there to simply be superior riffs and songs in general. Grab does the trick if you seek something mindless, scathing and irreverent to frighten your neighbors' pets or compel the local Jehovah's Witnesses to keep a wide berth from your home, but it's ultimately an average, mechanical and phoned in 'also-ran' for the form.