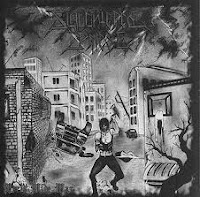 It's amazing the difference a single year can make in plotting the course of a metal band. Just one year prior, Greeks Slaughtered Priest had released a laughable if forgettable effort of blackened punk thrash called Eternal Goat Reign, with much of the trivial and smug perversity such a title would imply. But here we are, standing in the ashes with World Wide War, an effort that totally trumps its predecessor in composition, musical ability and seriousness. Now, I'm not saying they've lost their sense of humor here. Just take a glance at the hideous cover art, for example. But World Wide War is seasoned, voracious black/thrash of the highest order, exercising a sheer obeisance to the power of lightning riffing redolent of influences as wide as Venom, Kreator and Aura Noir.

First, the air raid siren. And then the excitement, as "W.C. (World's Coffin)" erupts into a series of nuclear riffs that leave most of their competition in this field in the fucking dust. Seriously, the guitar tone here is amazing, thin but coiled and potent like a salvo of poisonous serpents. The black rasp of the Ungod has been honed to perfection, with a clear influence from Mille Petrozza or the older Sodom albums, and the backing gang shouts are well timed without inhibiting the lethal momentum. There is not a single guitar riff in this whole song that DOESN'T make me want to kick the shit out of someone, and about the only thing working against it might be the duration (over 7 minutes), which might have been trimmed down about 60 seconds for good measure. Fortunately, they don't stretch their luck with the further tracks, which in general range from around 4-5 minutes, and thoroughly continue the fun, precision riffing. Favorites include the sleazy speed metal of "Lightnings of Vengeance", the repulsive "Rise Against Humanity" and the thundering "Unholy War".

There are, on occasion, songs in which the simpler, punk fueled chords don't really match the more intense lickage surrounding them, namely the band's namesake "Slaughtered Priest", but here the duo attempts to at least compensate with a bit of variation. "Proud to Be a Sinner" is another that I wasn't entirely sold on, with some pretty bland guitar patterns set to a banal blasted sequence. The lyrics are also, in general, pretty pedestrian (not that I expected more). However, I'd say that of the 40 minutes of play length, you're getting a good 28 which will fuel your lust for denim jackets, patches, whiskey, spikes and sluts, and there's no question in my mind that this one of the more positive evolutions I've heard in all Hellenic extremity. Not a perfect album, but a great one. Whether you're into Witchery, Impaled Nazarene, Aura Noir, Bewitched, Audiopain or any sort of hybrid of the two styles, you'll want to experience this loudly, break a few glass bottles and dance mockingly about the radioactive wastes while you wait to be devoured by mutant cockroaches. Fun, fun, and not a bad way to go.