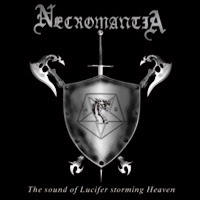 Though the band has never issued a bad album, I must admit that I'm not a fan of the aesthetic sinkhole that Necromantia flung themselves into post-Scarlet Evil Witching Black. Where once the band shelled out for these diabolic, colorful covers that wonderfully mirrored their brutal and sadistic bass-symphonies, they seem to have dropped the ball with a series of bland, symbolic standards that felt like something any random underground act could spawn. Of course, once you actually start spinning the disc, you're treated to an appreciable act of occult, pounding madness, but admittedly, even the music upon The Sound of Lucifer Storming Heaven seems to lack the sinister luster of its predecessors.

The intro is a symphonic jumble of war samples, big orchestral keypads and forgettable riffs that don't really build much anticipation for the rest of the record, while "The Order of the Sphinx" is simply not one of the more memorable constructions of their career, a largely blasted piece with fairly mediocre riffing, grimy rasped vocals and blaring horns that don't really do the trick. Once you delve a little deeper into the heart, there are more varied and engaging pieces like "For the Elder Magi: I - Eibon the Necromancer" and the roiling, heavy metal charge of "Knights of the Black and White Eagle", but even at its most immersive and engrossing ("The Invisible Empire") the writing seems scattershot and unable to match the epics from the first two records. Granted, this is still much of what you pay for on a Necromantia effort, a merger of blasphemous bass and cheesy but fitting orchestration.

By this point, the novelty of the band's approach had worn thin, so the onus was on the the duo to use their unconventional instrumentation to write their bloody hearts out, which they just do not accomplish here. Where the older records (even IV: Malice) had excellent bass riffs and a creepy if campy atmosphere, this just feels like the same ingredients were mixed in a blender with no care as to the results. They were never a band high on production values, yet with the 90s fare, there was still an inescapable charm to each release. Here, it feels like Baron Blood and Magus Wampyr Daoloth were attempting to write something more chaotic and disjointed, but instead of transporting to a limbo of rituals and dark arts, they come off brash and churlish. The lyrics are more solid than the music. The Sound of Lucifer Storming Heaven isn't terrible, but it's the worst of their full-length albums, and a bit of a letdown after a seven year wait.