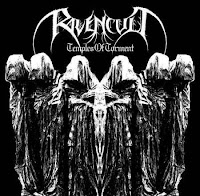 Ravencult's Armageddon Rising EP was a fairly competent foray into the grim night spectrum long associated with the Norwegian black metal circle, but it wasn't exactly the sort of groundbreaking or viciously engaging record to grow excited for. With Temples of Torment, their first full-length effort, they've made an admirable stride forward in not only the execution of the material, but the writhing, violent, oppressive subtext so intrinsic to the genre, a mesh of Mayhem's deathly consistency and Bathory's glorious, charging abandon. Temples of Torment might not be unique; but it is, in fact, the best of Ravencult, an album which makes damned sure to smash your face repeatedly into its ghastly altar before sacrificing you upon it.

The production of the guitars here is huge: hefty, but possessive of a razor-like, cutting ability that holds up through the streaming, hostile chords or the higher pitched melodic knives that often tear off into the atmosphere. After the distorted, escalating chant that inaugurates "The Sigil of Baphomet", the band immediately strikes out to slay the audience with a blast beat. The guitars are admittedly pretty predictable here, but they still possess that primal motif that first brought so many under the genre's spell; and once the song breaks into the roving, Bathory like bridge riff, you've got no choice but to crush the nearest skull with whatever spiked apparel you are sporting. This technique is also used through the verse riffing in "Commence the Burning of Heavens", or "In Times of Demise". Seeking something more punk-fueled but equally violent? "Onslaught Command" is set to tear you up. Seeking something slower and more somber in its warlike breadth? "The Nighsky Codex".

Ravencult has the tones, and for the most part, they've got successful riffs. Just about the only element that lacks in their sound is any sense for subtlety. Temples of Torment is bloody and immediate, and if that's your style, then you'll be throwing orgasmic fits of appreciation with every blood-drawing cut. They don't usually go out for much variation, relying heavily on just one or two guitar sequences to carry a 3-4 minute song, but it proves enough for much of the debut. Though the band is Greek, and one of the better straight traditional black metal bands from that region, they lack the distinction of several of their local contemporaries. But to those in the mood for a howling blast of frozen, impenetrable evil, with lyrics that are actually worth reading for their hostile, blasphemous and inspirational imagery, they should more than suffice.