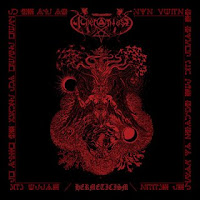 Coming of their strongest effort to date, Theosis, Acherontas continue to define and expand themselves through this brief EP Hermeticism, involving two tracks and 10 minutes of new material which for the most part continues the legacy of that full-length. One will notice that there is less of an intricate melodic palette here, the Greeks tend towards a simpler but more atmospheric construction, and yet the effect is much the same, carrying the listener into both an under- and overworld of occult expressions and ideas, with both abruptness and subtlety behind every shift in tempo.

'Side Draconian' involves the title track, a ringing balance of thick chords and discordant, sparse melodies that slowly gathers force as the deep narration and rasps begin to unfurl over a thin but impeccable lead. This then evolves into a beat, and inevitably to the warlike thunder of double bass beneath an awning of tremolo and echoing vocals. There are blasts later in the song, but it also measures itself off with more double bass segments to which dissonant, drafty guitars are applied. "Meum Nomen Deus", which is on 'Side Sorcery' has a similar balance of blasting surges, eerie guitars, tons of sweltering atmosphere and depth, and if I had to make one complaint about the EP it would just be that the songs feel too much the same in terms of overall development...

At any rate, if this is any indicator of where the new album Vamachara (also through Agonia) is going to move the Greeks, then we should be in for another experience that at least rivals the strong Theosis, even if these particular songs don't exactly surpass that. Hermeticism is a more potent sound, with less of the dueling tremolo streams that comprised its predecessor, but the atmosphere of the drumming presents a rock solid basin for the chords to simmer and the evil melodies to slice.