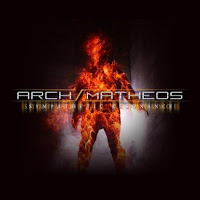 Hearing the voice of John Arch again after about 25 years is like having an unexpected trap door to my adolescence burst open and spectral fingers drag me in. Yeah, I know he put out an EP a few years back (A Twist of Fate) and I didn't pay much attention to it. My loss, but I'm truly glad that he and Jim Matheos have decided to continue their post-Fates Warning collaboration, and even more happy that they were able to utilize other musicians like Joey Vera, Bobby Jarzombek and Frank Aresti who all belong to the extended Fates family. That this is good stuff goes without saying, it's basically a modern spin on the Awaken the Guardian sound with a substantial wealth of compositional flair, and the few errant 'grooves' on the album which don't feel flush with this siren of psychedelia are very easily ignored just to have him back in the business...

In fact, Arch's performance is so crisp, clean and potent here that it feels as if he and Matheos must have built a time device, reached back into the 80s and kidnapped a younger version of himself, held at gunpoint (or being forced to listen to A Pleasant Shade of Grey repeatedly) until he complied. Hey, that's cheating! Nonetheless, the profit is all ours, as we are treated to what might be the damnedest approximation to classic Fates Warning that we are ever allowed to experience for the rest of our lives. I don't know about you, but I'll take it, because there is just nothing else like this guy's voice out there. Sympathetic Resonance provides 54 minutes of well plotted variation, with the catchy chorus melodies you remember, even if it's cast in less of a speed/power metal mold. From the massive, 14 minute groove-prog epic "Stained Glass Sky" down to the elegant seduction of "Incense and Myrrh", each line and just about every riff has been meticulously crafted to forge a balance between sorrow and anger, tranquility and exhilaration.

The leads are simplistic but effective, never staying beyond their welcome as they flirt and flummox through the mass of punching low-end chords and Jarzombek's flexible drumming. Arch is clearly given the center stage here, as it should be, but both the guitars and bass exhibit the intricate and cautionary skill level of their respective musicians, never over indulgent and almost always straight on the money. I also enjoyed how each track recalled to mind a sheaf of text from the grimoir of Fates Warning past. The little, melodic speed licks coursing through "On the Fence" reek of Perfect Symmetry. The gloomy calms of "Incense and Myrrh" and "Midnight Serenade" might have once found a home on The Spectre Within. And "Any Given Day (Strangers Like Me)" would have been infinitely preferable to any of the last three Fates albums before they embarked on their recent hiatus.

In the end, this is one hell of a treat, and I hope the collaboration deems itself fit to continue well beyond just the one album. Personally, I wouldn't mind a few more nods to their earlier, rustic speed/power metal material, as opposed to the more modernist jamming context here in the longer tracks that often feels a bit Dream Theater. That's the old school in me, the guy who likes to sit in a woodland or field on an autumn night and marathon the band's 1984-86 material while drinking heavily. A River's Edge moment. But as it stands, the professionalism and the progressive foundations here are considerably engaging, and the voice is undeniable. Thank every constellation in the sky that you are back, orphan gypsy, and thank you too Mr. Matheos for composing the plot line.