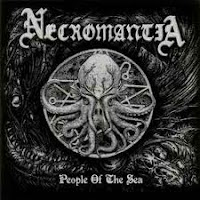 Proof that all empires inevitably meet their ends, The Sound of Lucifer Storming Heaven was the first Necromantia album to plunge beneath the axis of quality established by their indomitable classics Crossing the Fiery Path and Scarlet Evil Witching Black. Not that IV: Malice was much to wrote home over, but it at least had a few compelling moments to hold on to. Its successor felt like a scatterbrained phoning in of the band's high-held, unique aesthetics with almost no resonant songwriting. People of the Sea is one of a pair of short works they'd release in the following year (the other being the split with Acherontas), and only a few hundred copies of this were released as a 7" or picture 7" variant, so in all reality it is meant for the paws of collectors and ideally, no one else.

You see, the problem is that, of the two songs, one had already been released. "My World, Your Hell", a decent enough and vicious Necromantia track that is just about as venomous and unrelenting as the band has ever gotten, is the B-side, and it's taken straight from the band's Covering Evil (12 Years Doing the Devil's Work) compilation, upon which it was highlighted as the new track. In other words, useless and redundant unless you've not got access to that release. But "People of the Sea" itself, upon which the Lovecraftian and ominous cover heraldry is lovingly affixed, is actually a pretty tight track, better than anything on the previous full-length. The dueling basses are delivered in thick, melodic, strangely uplifting chords that alternate with choppier black/thrash riffing, and the trough of distorted notes that wind over the ambiance of the bridge create an eerie shelter from the hunger of the Deep Ones (I'm assuming) that this song is obviously in to.

So, a good song at least, and evidence that perhaps there was some gas left in the Greeks' tank after all. But really, with approximately 400 copies in print, it's not all that likely you will come across the 7", and as the B-side is essentially a waste of space, this ultimately feels like another useless trophy to hang in a collector's bin or up on some wall somewhere. I like the cover art here, as opposed to The Sound of Lucifer Storming Heaven or IV: Malice, but there's just not enough here to bite off. "People of the Sea" is also available on the Acherontas split, ...For the Temple of the Serpent Skull...", with another, longer unreleased Necromantia track, so it'd be far more worth your while to track it down over there.